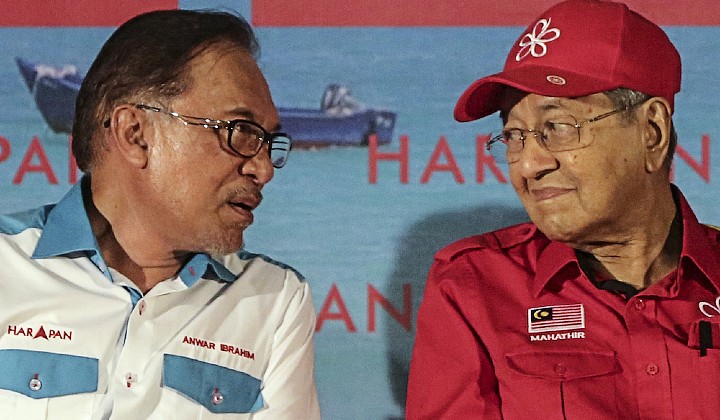 With allegations of a new coalition forming to replace Pakatan Harapan (PH) rocking the nation over the weekend, TRP brings you a close play-by-play of the current happenings surrounding Malaysiaâ€™s political arena.

11:30pm – The 11 former PKR members from Azmin Aliâ€™s cartel justified their actions and claimed that it was meant to save the country. [New Straits Times]

9:44pm – The Cabinet of Ministers have been disbanded by the YDPA. [Malay Mail]

7:25pm – The YDPA reportedly accepted Dr Mahathirâ€™s resignation from his position as prime minister and appoints the 95-year-old as the nationâ€™s interim premier. [Berita Harian]

6:45pm – Dr Mahathir has left the Royal Palace after meeting with the YDPA. [Malay Mail]

6:08pm – Election watchdog Bersih 2.0 threatened to organise another public rally (Bersih 6) unless the nation holds new general elections following the collapse of the PH coalition today. Bersih along with several NGOs made a plea to the YDPA to dissolve the parliament and demanded PH deserters to leave the coalition immediately. [Malay Mail]

6:02pm – Warisan is in support of Dr Mahatir to remain as prime minister.The partyâ€™s president and Sabah Chief Minister Datuk Seri Mohd Shafie Apdal said that Dr Mahathir should be allowed to complete his term as Malaysiaâ€™s premier.[Free Malaysia Today]

5:08pm – Dr Mahathir arrived at the Royal Palace to meet with the YDPA following his formal resignation made earlier today. [Malay Mail]

4:23pm – Anwar Ibrahim mentioned that Dr Mahathir had no involvement and was distressed by the plot to reform the government. [Berita Harian]

4:12pm – Reportedly Dr Mahathir resigned from his position as Bersatu chairman following the partyâ€™s decision to break away from PH. Sources claimed that Dr Mahathir refused to work with Umno to form a new government. [Straits Times]

3:36pm – Anuar Ibrahim and Dr Wan Azizah have concluded their meetings with the YDPA at the Royal palace in KL. The two reportedly came separately earlier this afternoon for an audience with the King. [Berita Harian]

3:22pm – The fate of the nationâ€™s government now rests in the hands of the YDPA. The King can decide to either appoint a new prime minister from a new majority in parliament or to dissolve the parliament entirely. [New Straits Times]

3:02pm – Datuk Seri Dr Dzulkefly Ahmad signed off as Health Minister while announcing that 20 out of 22 Covid-19 patients here in Malaysia have recovered from the illness. [Free Malaysia Today]

2:55pm – Umno leaders and MPs are set for another meeting today at the partyâ€™s HQ at the Putra World Trade Centre, KL. Reportedly members were also told to be ready for an expected audience with the YDPA. [Berita Harian]

2:44pm – The ruling PH government has officially collapsed. This following the resignation of Dr Mahathir from his post as prime minister, the exit of Bersatu from the PH coalition and the resignation of several PKR MPs from the political party. [New Straits Times]

2:39pm – Anwar Ibrahim arrives at Istana Negara in KL to meet with the YDPA. [Berita Harian]

2:34pm – Azmin Ali and his cartel of PKR MPs announced their official exit from PKR to form a new independent block in Parliament. [Free Malaysia Today]

1:55pm – PKR deputy president Azmin Ali and vice-president Zuraida Kamaruddin have been sacked from the party. [The Edge]

12:04pm – Anwar Ibrahim along with Lim Guan Eng and Mohamad Sabu are meeting with Dr Mahathir at his personal residence in Seri Kembangan, Selangor. [Berita Harian]

11:57am – The Malaysian People’s Movement Party (Gerakan) members will convene for an emergency central committee meeting today. According to its president, Datuk Dominic Lau, among the agendas to be discussed is the possibility of PKR deputy president Datuk Seri Azmin Aliâ€™s â€œcartelâ€ of MPs joining the party. [Malaysiakini]

11:43am – Parti Amanah Negara (Amanah) vice-president and Deputy Human Resources Minister Datuk Mahfuz Omar said that the party gives its full support to the leadership of Dr Mahathir and the decision made during PHâ€™s presidential council meeting last Friday to allow the premier to arrange his step down after the Asia-Pacific Economic Cooperation (Apec) meeting in November. [New Straits Times]

10:51am – Veteran DAP leader and Iskandar Puteri MP Lim Kit says his party’s Central Executive Committee will meet at noon today but would not preempt it. [The Edge]

9:19am – PKR president Anwar Ibrahim is scheduled to meet with Prime Minister Tun Dr Mahathir Mohamad at the Prime Minister’s Office (PMO) in Putrajaya at 9.30 am. [Malay Mail]

Catch up on what happened over the weekend, HERE.