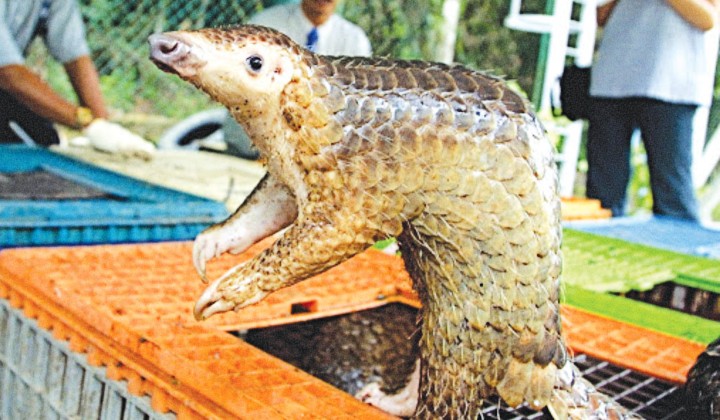 Scientists might have made a breakthrough in identifying the origin of the Novel Coronavirus (2019-nCoV) that have taken more than 900 lives and infected over 40,000 people across the world.

Researchers at the South China Agricultural University in Guangzhou, China believed that they may have narrowed down the possible source of the coronavirus outbreak to the small, scaly ant-eating mammal native to Asia and Africa; the lowly and endangered pangolin.

After toiling with genetic sequencing and analysis, the scientists found that virus samples taken from wild pangolin specimens were 99% identical to viral samples isolated from human patients infected with 2019-nCoV.

Though the team is not 100% sure that 2019-nCoV did in fact originate from pangolins, the research does bring in new evidence to the prevailing theory which suggests that the deadly new virus might have come from bats.

Coronaviruses are also zoonotic, meaning they are transmitted between animals and people.

With this latest discovery, scientists believed that pangolins might have served as an â€œintermediate hostâ€ in the virusâ€™s jump from animals to humans.

This theory is made even more plausible considering that researchers have previously found that pangolins might have already been dying from coronavirus infections.

But considering the stakes involved, scientists are still awaiting clearer results to determine whether or not 2019-nCoV did originate from the tiny mammal.

Sought after for their meat, unique scales and other body parts, pangolins are regular victims of the illegal wildlife trade and have the sad, notorious reputation of being the most trafficked animal on the planet.

In the past decade, over a million of these miniature carnivorous mammals have been taken from the wild to supply markets in China and Vietnam to be consumed or used as traditional remedies treating a variety of ailments.

Today, all 8 pangolin species have been labelled as protected species under international law, with 2 species listed as Critically Endangered on the International Union for Conservation of Nature (IUCN) Red List of Threatened Species.

The animal has also been declared a â€œtotally protectedâ€ species by the Sabah Wildlife Department and pending its protected status in Sarawak.

The international wildlife trade means big business. Annually, millions of animals and plants are snatched from the wild and sold for food, medicine, trophies, and pets in a global multi-billion dollar industry.

The wildlife trade is made even more lucrative with the increased demand for traditional Chinese medicine.

Reportedly, China has been pushing to expand its traditional medical industry through itâ€™s Belt and Road initiative by setting up more and more hospitals, museums, medicinal zoos and botanical gardens catered to traditional medicine.

Though the scale of Chinaâ€™s wildlife markets is rather vague, apparently the Chinese government does allow more than 50 species of wild animals to be bred, traded and consumed for dietary, medicinal as well as scientific purposes.

The list includes a host of animals like wild boars, deers, hamsters, crocodiles, minks and many others.

These animals can be found at Chinese wet markets across the country, like the Huanan Wholesale Seafood Market, a suspected ground-zero of the 2019-nCoV coronavirus.

Following the viral outbreak of 2019-nCoV, China had placed a temporary ban on the trade of wild animals in the country as a measure to control the spread of the virus.

A similar ban was emplaced during the SARS epidemic back in 2003.

However, conservationists are arguing that China should instead put in place permanent measures to completely ban the trade of wild animals in the country as a means to ensure public health and safety as well as to counter global illegal wildlife trade.

Though eating wild game is a common practice in China (and across the globe, to be fairâ€¦), according to Chinese authorities the number of people actively consuming wild and exotic meats in the region has been decreasing over the years and most modern households no longer take part in such practices.

Get up to date with the latest news and highlights on the global 2019-nCoV epidemic HERE on TRP, or find out how you can protect yourself and your loved ones from infection with our easy-to-read hygiene guide HERE.