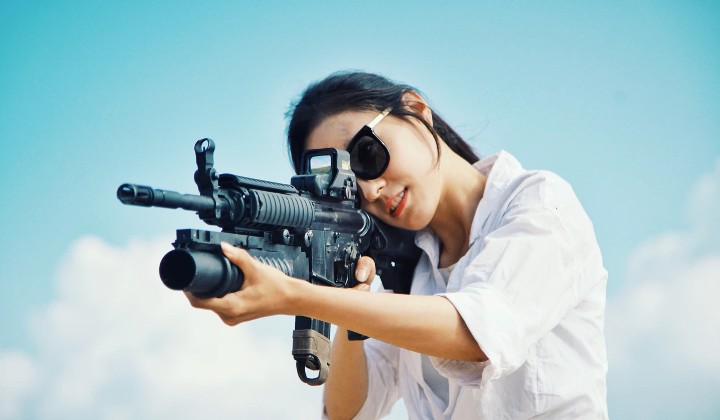 Police will be taking away the firearms license of rifle owners in Malaysia at the start of 2020 in a move to curb wildlife poaching within our borders.

Apparently, authorities were also no longer approving applications for gun licenses out of fear that the weapons could fall into the possession of militant groups.

Naturally, TRP got a little trigger happy to find out how exactly does one attain a legal firearm here in Malaysia?

So can a Malaysian civilian carry a firearm?

Long answer: Yes, BUT Malaysiaâ€™s firearms laws are super strict and getting formal approval can be taxing.

Youâ€™d need official permission from the authorities for everything, from owning a gun to being allowed to repair, sell, or even inheriting a weapon.

According to the Arms Act 1960, absolutely no one is allowed to possess, carry or use any firearms or ammunition (the gunâ€™s bullets) without a valid â€œarms licenceâ€ or an â€œarms permitâ€.

Youâ€™d also need to have a legal permit to own an imitation or fake gun that has the appearance of a real firearm. (Like an air-soft gun that shoots BB bullets.)

Those who are caught in possession of an unlicensed firearm can face serious consequences.

For instance, if you are caught having a gun without any documentation, you could face a minimum sentence of 14 years in prison and six strokes of the cane.

If youâ€™re caught discharging or firing a gun at someone with the intent to injure or kill that person, then itâ€™s the death penalty.

Youâ€™d even be slapped with a charge if you fail to report to police if you have knowledge of someone carrying an unlicensed gun.

And non-Malaysians entering the country with a firearm must officially declare and register their weapons with the authorities, so itâ€™s worth knowing that having, or being seen with a gun in Malaysia is no joking matter.

(P.S. All these regulations and punishments are also listed in the Firearms (Increased Penalties) Act 1971 if youâ€™d like to take a crack at it.)

How does one legally get a firearm?

Well, if you ever decide to go gun shopping, then you should know that acquiring a legal firearm in Malaysia is actually a relatively simple process, but getting the application approved might prove difficult.

If you are a Malaysian citizen over the age of 18, who is physically and mentally fit and don’t have any prior criminal record, you’re basically eligible to legally own a gun here in Malaysia.

A formal application can be made online through PDRMâ€™s official website or at your local District Police Headquarters where your request shall be reviewed and approved by the stateâ€™s Chief Police Officer.

In order to own such a weapon, you must also state a valid reason to why you would need to possess a firearm, and legally there are only a few approved purposes for a civilian to own a gun;

Once you have that down and have completed and submitted all the necessary forms and documents, the application typically takes up to 180 business days to process.

As soon as you receive your gun license, then purchasing a gun should be as easy as hitting the browser and looking up your friendly neighbourhood gun store.

Being a gun owner is no cakewalk and thereâ€™s a whole lot of responsibilities attached to having the power to kill a person literally in your pocket.

Besides knowing how to use and maintain the weapon safely and responsibly, youâ€™d have to abide by strict restrictions on the type of weapon and the amount of ammunition youâ€™re allowed to carry.

A gun owner would also need to file an application to purchase more bullets, having to return the spent ammo casings to the authorities every time they expend their ammunition.

Malaysian law also dictates that a firearms license would expire annually every June 30th. Meaning that youâ€™d need to renew your licence every year to continue owning a weapon.

And remember how we said that a gun owner needs to know how to handle a firearm RESPONSIBLY?

Well if a gun owner happens to slip up in any way, like misplacing a weapon or any of its bullets, or even being caught with a gun while being intoxicated, then be prepared to have that licensed revoked and be slapped with either heavy fines or jail sentences, or both.

Interestingly, despite how hard it is to actually get legal approval to own a firearm here in the country, there are still a whole lot of guns registered to Malaysians.

As of 2016, the Home Ministry reported that nearly 90,000 Malaysians were issued licences to bear arms.

A total of 12,917 licences were issued for handguns while a total of 63,145 licenses were given out for shotguns and rifles.

Licenses were also issued to other types of firearms like stun guns, spear guns, nail guns and even flag pistols.

According to data collected by the international Small Arms Survey in 2017, there are a total of 142,038 registered firearms here in Malaysia and a total of 74,962 un-registered weapons lurking about somewhere on the streets of the nation.

How are there so many un-registered weapons you might ask?

Well, we can never know for certain, but the illegal black market would most likely be the main reason for it.

Based on available reports, it would seem that weapons and illegal firearms can be easily obtained from neighbouring countries.

These weapons are transported and smuggled into Malaysia through either so-called â€˜rat trailsâ€™ along the Malaysian borders or directly through customs and security checkups in areas with weak enforcement.

These illegal firearms become the weapons of choice for the countryâ€™s criminals and crime syndicates as not only are they easy to acquire, they can also be incredibly cheap.

Supposedly, a handgun can be purchased illegally for a mere RM60 and a dangerous weapon such as a semi-automatic rifle can cost as little as RM2,000.

Though there’s a shocking amount of both legal and illegal guns in Malaysia, you probably should not be too worried because the chances of getting shot here are still relatively low.

According to a study by Universiti Kebangsaan Malaysia, between 2006 to 2016 there were only 204 reported cases of firearm-related deaths within the Klang Valley.

And data from the University of Sydney’s statistics and GunPolicy.org shows that 49 people died from being shot with a firearm in Malaysia in 2017, compared to 74 deaths recorded the previous year.

But, if knowing that still send shivers down your spine, just know that a bulletproof vest can easily be purchased on the many online shopping sites available out there. 😉