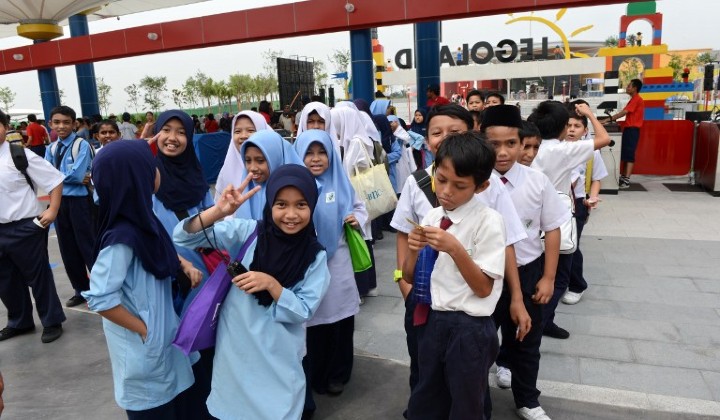 School season is back in Malaysia as the country’s pupils start their first day in class for the 2020 academic year.

During the first day of school, the imagery that comes to mind is usually wide-eyed young Malaysians lining up with their brand new school uniforms.

Parents know how costly necessities are to prepare their children for school, as they would have to spend a minimum of RM200 just to buy school supplies and uniforms per child.

To tackle the issue, some parents even resorted to sewing their children’s clothes, which costs less than RM10.

But have you ever wondered why students have to wear uniforms in the first place?

How did the uniform come about

The origin of the modern school uniform can be traced to the 16th century.

The first recorded use of standardised dressing in education was in 12th Century England, where students wore a robe-like outfit.

For Malaysia, formal education was initiated by Muslim missionaries who migrated to the country and taught the locals about Islam.

From this came the hut schools or more affectionately called as sekolah pondok, madrasahs and other Islamic schools.

Then along came the British with their education system during the 19th century as schools were established in the Straits Settlements – Penang, Melaka, and Singapore with the oldest being the Penang Free School which was built in 1816.

It wasn’t until after World War II that Malaysia began a modern education system.

Although pupils were required to wear school uniforms since the 1900s, the present design was only standardised beginning in January 1970.

In Malaysia, it’s compulsory for students to wear school uniforms during the school period although added requirements might differ slightly for different schools.

Boys in secondary schools are required to wear dark olive pants along with a white collared shirt and they can either be short or long-sleeved (depending on the school).

In primary schools, their dress code is the same for boys with the exception of the colour of the pants which is dark blue compared to green.

As for the girls, they can either wear a plain-coloured baju kurung with a long turquoise skirt or a pinafore with a white shirt. It’s the same either in primary or secondary school.

Many schools also have other requirements for girls such as Muslims who can only wear baju kurung while non-muslims can choose either.

Certain schools would also require their students to wear school ties as well but in most cases, it only applies to librarians, prefects, class monitors.

Schools usually enforce their uniform codes with regular checks and students who fail to comply can be warned, given demerit points, publicly punished, sent home from school, or even caned.

There are pros and cons when it comes to how children should wear during schooling hours with both sides having valid arguments.

In the pro-uniform camp, they’ve argued that uniforms can create disciplined children, remove the social class distinctions between classmates, and increase school pride and community spirit.

Some even said that besides students’ focus, they can promote a sense of safety on campus and even reduce school shootings.

As for those who are against uniforms pointed out that it reduces individuality, imposing additional costs for parents who have to wear multiple uniforms and causing discomfort to students.

There’s even a petition online to allow students to wear casual clothes to school due to humid weather with 2,000 backers.

However, now the Education Ministry has been slowly changing how our children dress for school.

Besides allowing for black shoes and socks starting 2021, the government has been a bit more relaxed in school apparel as Form 6 students are now allowed to wear casual clothing when attending classes.