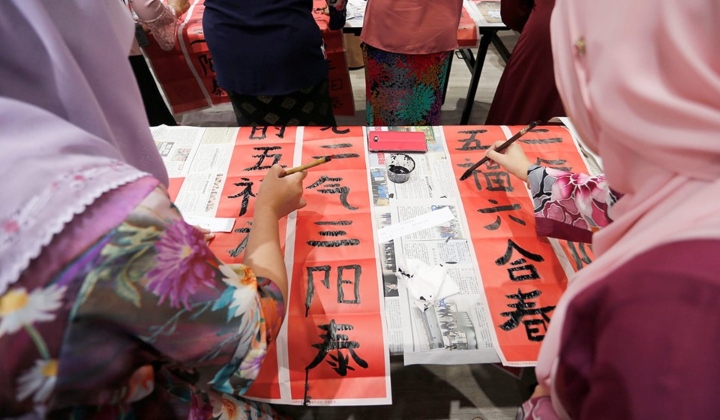 Malaysia is a melting pot of various races, religions and cultures. This diversity makes our food the best in Southeast Asia.

But unity in diversity is more than just the pride of our food.  It’s understanding, respecting, and participating in each other’s cultures and practices.

This decision also included a move to add khat, the art of Jawi calligraphic writing, to the year 4 Bahasa Melayu syllabus.

The decision was strongly opposed by Chinese education groups and some members of the public due to fears of Islamisation.

What many people have misunderstood about Jawi and khat is that they think it’s Arabic. But the truth is, Jawi is just the old script used to write Bahasa Melayu.

Exactly like how Mandarin has two scripts: Hanzi and Pinyin, Bahasa Melayu also has two scripts: Jawi and Latin alphabets a.k.a Rumi. Khat, on the other hand, is just the calligraphical art of writing Jawi.

Historically, Jawi came about from the influence of early Arabic missionaries who travelled to this region sometime around the 13th century.

To educate the local folk, they had to translate books from Arabic to Malay and therefore used their own alphabet for that purpose.

So, in that sense, the Arabic influence of Jawi to the Malay language is no different from the introduction of Rumi (Roman alphabet) as the written script for Bahasa Melayu by Portuguese explorers in the 1500s.

The explorers needed to write dictionaries for themselves to make it easier for them to understand the Malay language.

Although many Chinese Malaysians appear to be opposed to the idea, there are also many who are not opposed.

So really, the implementation of teaching Jawi and khat in schools provides students with the chance at learning the country’s palaeographic history more than anything else.

If you’re interested in the history of Jawi in Malaysia, you can read more about it in this very interesting but long historical research paper. And if you want to know more about the history of Malay scripts, we recommend you take a look at this excellent article by Cilisos.my.