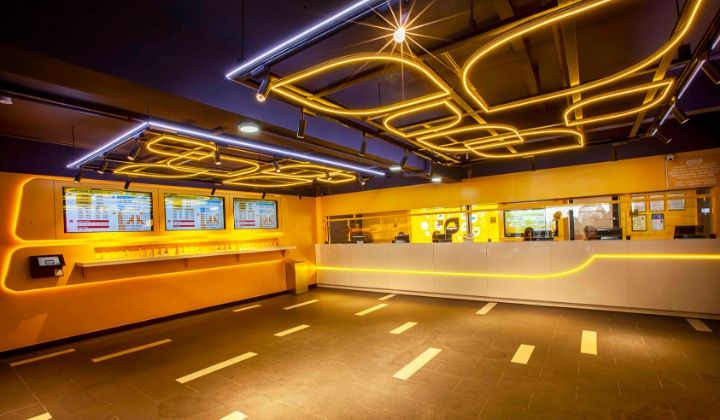 We would usually expect flagship stores to be opened by brands that sell products like gadgets, clothing and accessories, furniture, or other household items. But for a lottery gaming company to have a flagship outlet? Thatâ€™s almost unheard of in Malaysia.

And thatâ€™s exactly what Magnum just did in Genting Highlands.

The flagship outlet is actually a refurbishment of their pre-existing outlet in Genting.

Previously, the Magnum outlet in Genting follows the standard design and layout of their other outlets across the country. The familiar amber colours, bright counters, and the handwritten notice board featuring all the winning numbers. Compared to these, the flagship outlet looks like a planetarium.Â

A lot of thought has been put into making the flagship outlet look cool and hip, no doubt about it. The management also included ergonomically-designed writing tables – the shape and height apparently help people write more comfortably.

Traditional notice boards have also been replaced with tablets, making the whole place look really modern. From the futuristic decor to the use of gadgets, you could easily tell that the purpose of this flagship store is to make the brand more appealing to the younger crowd.

The outletâ€™s Sales Representative, Anna Wong, said that theyâ€™ve seen an increase in customers since the refurbishment. â€œWe serve lots of casual players wanting to try their luck at the big Jackpot while theyâ€™re in Genting. Since the new look, many come to play a RM2 Jackpot ticket for fun,â€ she said.