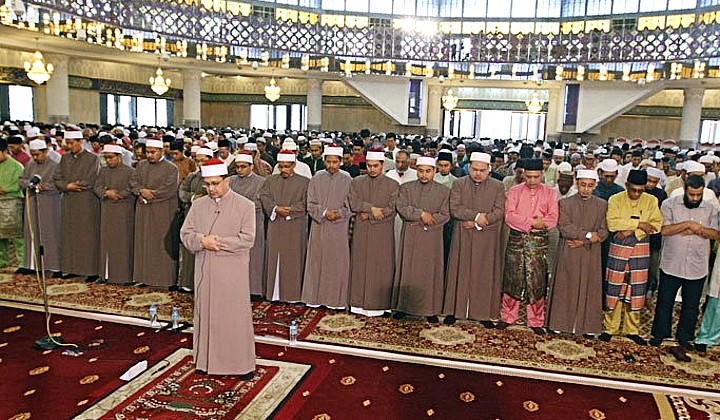 Six Muslim men were nabbed by Terengganu religious authorities for skipping Friday prayers while enjoying a day at a waterfall.

The four men and two teens between the ages of 17 to 35-years-old were arrested during a raid conducted by the Terengganu Islamic Religious Affairs Department at the Sekayu Waterfall in Kuala Berang.

According to reports, the operation involved the departmentâ€™s female officers scouting the recreational area for males who were absent from the mosque during the obligatory Friday prayers before itâ€™s male officers came and made the arrests after prayers concluded.

The accused were found guilty under Section 16 of the Terengganu Syariah Criminal Enactment (Takzir) for deliberately missing the compulsory Friday prayer which provides a maximum jail sentence of two years, or a fine of up to RM3,000.

All six were sentenced to spend a month in jail and fined more than RM2,000 each.

But hold up. Can Muslims be criminally charged for not performing prayers?

Prayer or Salat is the second Pillar of Islam and is obligatory for adult and able-bodied Muslims (male or female) to perform five times a day.

For Friday prayers, only men are obligated to attend the prayer session at the mosque and are not allowed to miss the prayer more than 3 times without valid reason.

Not only is missing prayers without reasonable cause a sin in Islam. In some Muslim countries, it is also considered a punishable criminal offence, including in Malaysia.

So letâ€™s get technical.

The Malaysian Syariah Court system has jurisdiction over matters pertaining to Islamic law, where a Muslim can be tried and charged for religious and moral violations like khalwat (close proximity), sex out of wedlock, and if caught eating during the fasting month.

The Syariah court also presides over matters of Islamic family law like marriages, divorce, inheritance and the likes.

Under the Federal Constitution, the Syariah courts and areas of Islamic law falls under the regulation of each individual state.

And each state has its own set of rules called, Enactments, pertaining to Syariah law. (This includes the Federal Territories of KL, Putrajaya and Labuan which are controlled by the Federal Government)

So just in case you were curious, here are jurisdictions that have Enactments and legal consequences for Muslim men who deliberately miss Friday prayers:

Based on our research, Sabah and Terengganu also have an Enactment that punishes those who deliberately miss fardhu prayers (the one which is obligated for Muslims to perform 5 times a day).

And as far as we checked, Sarawak is the only state which has no laws that criminalise anyone who skips prayer.

So if you’re thinking about skipping prayers, you better think again…