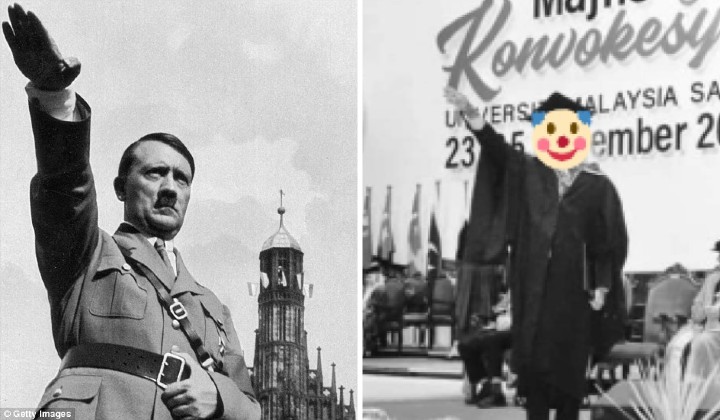 A recent graduate of University Malaysia Sabah shocked the country with a Nazi Salute during his convocation.

The image was uploaded to Facebook together with an impassioned speech where he proudly rallied against the mistreatment of Muslims in Gaza by the Jews.

I presented the symbolic Hitler (salute) on UMSâ€™s sacred stage because the world has been blind and deaf while the Jews reigned supreme, as though Islamic nations were only clowns to be made fun of in global politics.
Therefore I am in solidarity with Gaza because of my anger, hate and resentment towards the Jews. Therefore I am thankful to Hitler for the Holocaust.

Everything is problematic and thereâ€™s so much to unpack here, but letâ€™s just focus on one thing to make it easier for everyone.

The main reason why the Israeli â€“ Palestinian conflict got so bad was because of the Holocaust.

Before the Holocaust, most Jews opposed or were indifferent to Zionism.

After the Holocaust, the Jews desperately wanted a state of their own to protect, rescue, and shelter them from being hunted and killed.

Zionists took the opportunity to push their agenda further, and Zionism soon became the dominant ideology across the Jewish world. Even Jews who lived outside of Israel became vocal advocates of the creation of a Jewish state in Palestine, much to the Palestiniansâ€™ horror.

In May 1948, the Zionist movement established Israel and some 140,000 Holocaust survivors entered the new state in the next few years.

This led to a bitter struggle over land that has lasted for almost 50 years. Hitler may not have supported the Zionist movement, but the Holocaust certainly used to incite a hostile takeover of Palestine.

Basically, by being thankful to Hitler for the systematic and cruel deaths of millions of Jews, our resident Neo Nazi is grateful for the very thing that intensified the struggle.

Congratulations, you played yourself.

While his anger may be justified, choosing to use Hitler and his Nazi ideology missed the mark on so many levels.

Itâ€™s honestly a surprise that people havenâ€™t called for his degree to be withdrawn.

FYI, 29th of November is the International Day of Solidarity with Palestine if you want to show your support for the cause, but do it the right way, not with a sieg heil.