In 2019, an unfortunate yellow MyVi fell into a sinkhole on Jalan Maharajalela in KL. 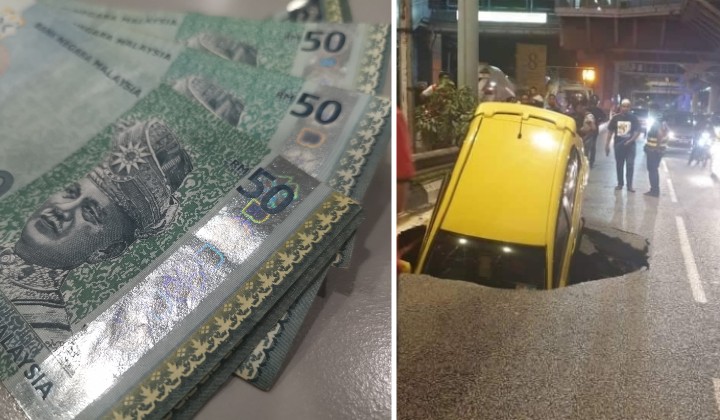 So, you were literally driving your car along the road when suddenly a sinkhole appears in front of you. You try your best to avoid it but inadvertently fail and end up falling in.

Now you’re hurt, and your car is damaged.

One of the questions that might come to mind is: “How am I gonna pay for the medical bills and repairs to my car?”

The answer depends on many factors, the main factor being where the sinkhole appeared, with why it appeared also being an important factor to consider.

So, if the sinkhole appeared on the PLUS highway, then the body responsible would be the highway concessionaire.

Meanwhile, if the sinkhole appeared on the road under the jurisdiction of the Ministry of Works (Kementerian Kerja Raya, KKR), then it would be their responsibility.

TIP: If you aren’t sure which road belongs to whom, roads belonging to the local council usually have names. Like Jalan Maharajalela or Jalan Pinang for example. Both of which fall under Kuala Lumpur City Hall’s jurisdiction (Dewan Bandaraya Kuala Lumpur, DBKL).

On the other hand, main roads that connect to a highway or a trunk road usually belong to KKR.

This is important because although technically the Mayor of KL can’t stop you from asking for compensation or taking legal action against them, whether or not your claim will be successful depends on the results of an investigation conducted by an insurance adjuster and the decision of the courts.

According to DBKL’s FAQ page, if your damages were caused by something out of their control like natural disasters, for example, then they probably aren’t gonna compensate you.

What if the sinkhole wasn’t caused by “nature”, but by a burst water pipe belonging to SYABAS?

Although the premise may seem complicated, it’s actually still really simple. You still claim it from whomever’s jurisdiction the road falls under.

This should be applicable for both vehicle damages and/or medical expenses.

In the case of the yellow MyVi which fell into a 3 square metre sinkhole on Jalan Maharajalela on Sunday night (24 Nov 2019), the driver of the MyVi can easily prove that the cause of the sinkhole was a burst SYABAS pipe as it has been widely reported in the news.