Despite calls from all quarters of society to get an anti-child marriage law installed, it seems that Malaysia is still being held back from making this a reality. 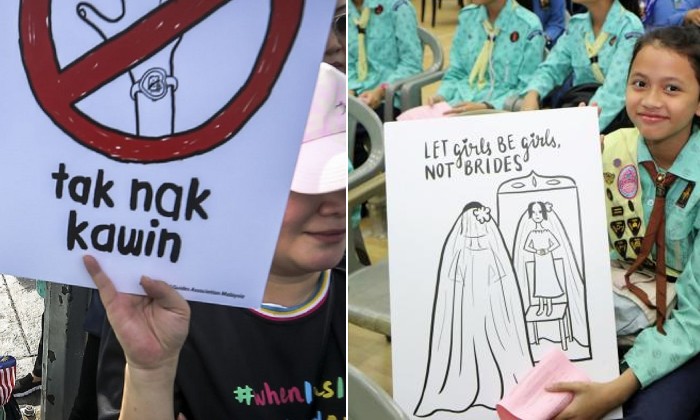 It’s been six decades after Merdeka, and the Malaysian government has yet to come up with proper legislation to ban child marriages.

Recently, Women, Family and Community Development Minister Datuk Seri Rina Harun said that her government does not have any plans to ban underage marriages for now and claims that they are committed to curbing underage marriages by implementing the “National Strategic Plan in Handling the Causes of Child Marriages” which you can check out in detail, HERE.

In a written Parliamentary reply, she said that this is because the root cause of underage marriage does not only need to be addressed through law amendments but instead requires education, advocacy, strengthening of family institutions and socioeconomic support in the community.

Despite calls from all quarters of society to get an anti-child marriage law installed, it seems that Malaysia is still being held back from making this a reality.

Read More: Tweet By M’sian Brings To Light The Dark Side Of Child Marriages In Malaysia

Moreover, in 2019, a total of seven out of 14 states we have here in the country had opposed amending existing laws that allow children and adolescents below the age of 18 to be married:

Another five states have previously hinted at adopting the legislation, but has thus far been quiet:

The state of Selangor is technically the only place in the country where the minimum age of matrimony is 18.

So what’s the problem?

Aside from the lack of political will, it can be summarised that the problem lies with Malaysia’s complex legislative system — a Federal vs State jurisdiction issue.

Under the country’s current Civil Law, the minimum age for marriage is 18. But this law only applies to non-Muslims.

The law also makes it compulsory for individuals under the age of 21 to seek permission from their parents to get married. But, 17-year-old boys and 16-year-old girls can still marry or rather be married with a licence issued from their state’s Chief Minister.

A totally different rule applies to Muslims in Malaysia

Under the Islamic Family Law, which falls under state jurisdiction, the minimum age for marriage is set at 18 for boys and 16 for girls. But those under that legal age limit can still be married with permission from the Shariah courts.

There also exists a customary law under the Native Courts Enactment which governs Malaysia’s native and indigenous communities.

Additionally, based on Article 74 of the Federal Construction, a state has the authority to set rules within its borders or oppose laws made by the federal government.

This legal loophole makes it hard to set a universal minimum age limit for marriage.

Is the problem really that bad?

Based on available data (which is in itself outdated) 1,856 child marriages were recorded across the country in 2018 — of which around 90% were girls.

The state of Sarawak previously topped the charts for having the most registered child marriages.

Meanwhile, the United Nations Children’s Fund (Unicef) concluded that the Covid-19 pandemic has exacerbated the risk of children being married off due to school closures, economic disparity and cases of underaged pregnancies.

There is also evidence of children being married off as a solution to a family’s financial problems.

So is there hope for our kids?

Based on Article 75 of the Federal Constitution, Federal Law shall prevail over any inconsistencies with State Laws. This includes amendments to the state’s Islamic and Shariah laws.

With enough pressure from the Federal Government, as well as Malaysians, there might still be a way to end child marriages in the country and let our kids be free to be just that… kids.