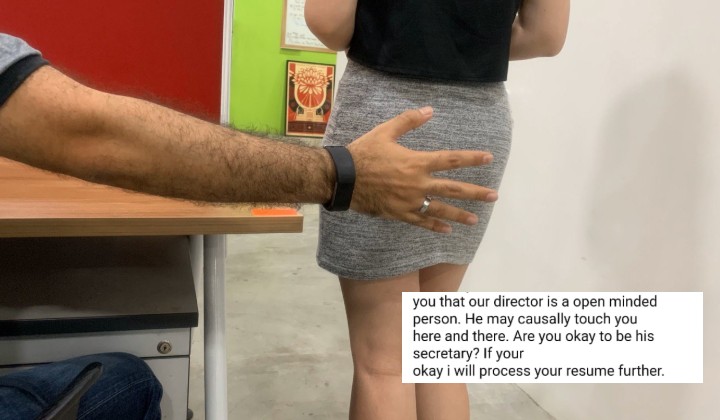 Making dirty jokes and sexual innuendos tend to be quite commonplace in the working environment. Weâ€™re all adults and understand that itâ€™s just casual office banter.

So, when do these things cross the line and become sexual harassment?

Kayne Is Not Amused GIF from Notfunny GIFs

Recently, a Twitter user shared the experience of someone coming face to face with blatant sexual harassment in the workspace.

The worst part was that the person hadnâ€™t even started working for the company yet.

According to the tweets, after applying for the position of personal secretary to the director of a company, the applicant received an email detailing her “job description”.

The obviously corrupt work culture of the company was further highlighted by the fact that the HR department labelled the director who regularly sexually harasses his personal secretary as being an â€œopen-minded personâ€.

Apparently, the company has been doing this for several years now.

another victim from same company

THEY BEEN DOING THIS FOR AT LEAST 2 YEARS!!! 2 YEARS!!!! GOD KNOW HOW MANY VICTIMSSSSSS!! pic.twitter.com/cMe7TaEwax

And it appears that this practice is widespread.

We canâ€™t decide which part of this is more offensive: the fact that the sexual harassment is widely known and accepted as part of the job descriptionï»¿, or the fact that agreeing to be regularly sexually harassed is awarded a higher salary.

Currently, there are no specific laws in Malaysia that make sexual harassment a punishable crime.

Instead, sexual harassment is only discussed as something that happens in the workplace, and it is managed with the Code of Practice on the Prevention and Eradication of Sexual Harassment in the Workplace. Sexual harassment is also mentioned and defined in the Employment Act 1955.

However, the code and the Act merely lay out a guideline for companies. And it is completely up to the company to decide whether a complaint merits an investigation or action taken.

And some companies clearly choose to ignore it.

Statistics show that over one-third of Malaysian women have experienced sexual harassment.

Men arenâ€™t safe from this either. Although highly under-reported, the police recorded 257 reports of men being victims of sexual harassment between 2013 and 2017.

According to Deputy Minister Women, Family and Community Development, Hannah Yeoh, an online poll conducted by the ministry saw around 28,000 respondents admitting to having experienced sexual harassment.

As we mentioned above, there are no current laws that consider sexual harassment as a punishable crime.

Instead, such cases tend to be investigated under Section 509 of the Penal Code: Insulting the modesty of a person.

Meanwhile, the government is reportedly awaiting the results of an impact study which will reportedly serve as a guideline in drawing up the Sexual Harassment Act and in improving existing regulations.

You can check out the full thread on Twitter:

Got this from a Friend’s friend

so now employer can ask candidate is it ok the boss “casually touch you here and there”?@mkula @drwanazizah @hannahyeoh pic.twitter.com/1yFgnkW69X