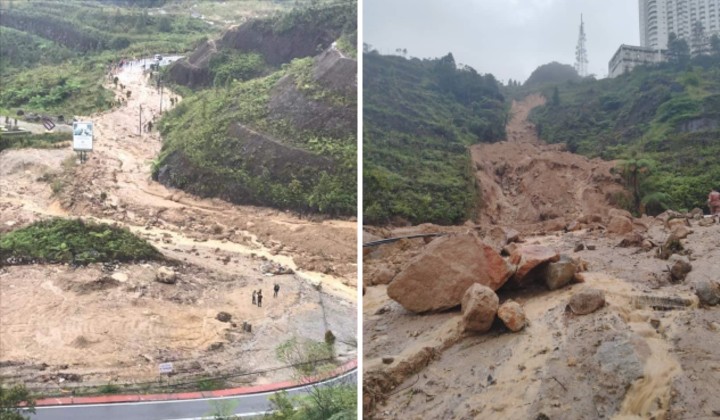 [UPDATED – This article previously incorrectly stated that the landslide had affected both lanes of Jalan Genting to the Amber Court apartments, it has been corrected to the road leading to Amber Court and Ion Delemen]

Malaysians were more than happy with the coming of the monsoon transition phase that brought an end to the previously suffocating transboundary haze that blanketed the entire nation.

Though the clear smokeless skies and chilly mellow weather is a blessing, the frequent onslaught of heavy downpours and thunderstorms have caused some areas to be affected by flooding and even worse, landslides.

This was exactly what happened at Genting Highlands on Tuesday (November 5) when a major landslide had buried and blocked one of the roads leading up and down the mountain.

Video footage and images of the landslide went viral on social media.

In one video, a river of mud, rock and water can be seen crashing down a hillside, blocking the path of several vehicles on the road.

Fortunately, no one was hurt during the natural disaster.

Reportedly the incident happened at around 5pm, affecting the road leading to Amber Court and Ion Delemen.

According to the Genting Highlands Fire and Rescue Department, there was still ground movement occurring at the affected area and authorities are monitoring the situation closely to ensure public safety.

The area was also sealed off to allow for cleanup works.

However, the main public road leading up and down Genting was unaffected by the wall of dirt and its business as usual at the highland resort.

You can catch the full video of the landslide as it happens here:

In July, heavy rains had previously caused flash floods that trapped several tourists on top of the mountain.

The flooding was attributed to the areaâ€™s drainage systems being unable to accommodate the massive volume of rainwater.

[UPDATED – This article previously incorrectly stated that the landslide had affected both lanes of Jalan Genting to the Amber Court apartments, it has been corrected to the road leading to Amber Court and Ion Delemen]ï»¿