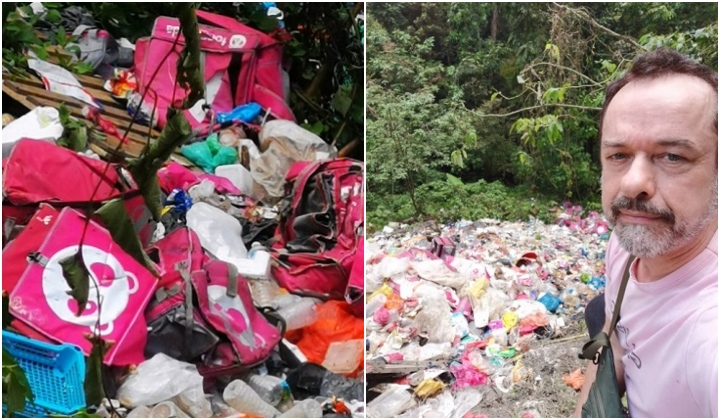 This week, the Malaysian internet is abuzz by the sight of huge amounts of rubbish and Foodpanda waste dumped in the jungles of Gombak.

In the video, Andy lamented his shock and horror at finding the disgusting heap of rubbish besmirching the pristine Malaysian jungles.

What the? What are you doing? Chucking all this rubbish. Look at that! The jungle is not a dumping ground you ignorant a**holes.

What’s more, he exclaimed that the dumped trash was mainly of
Foodpanda waste and in the shared images, bright pink food delivery bags
emblazoned with the company’s panda logo could clearly be seen.

Following the massive uproar on social media, the food
delivery company has come out with a statement to explain their side of the
story.

Foodpanda told Malay Mail that an investigation has been launched on the matter and they have also reached out to Andy for the exact location to remove their trash immediately.

According to their statement, the Foodpanda delivery bags are dismantled, sorted and sent to recycling facilities.

While there is no concrete proof to ascertain if Foodpanda was aware or responsible for illegally dumping their rubbish, this scene is actually not unusual in Gombak.

According to Andy’s replies to the Facebook post, he came across
the pile close to the Orang Asli Hospital along Jalan Gombak.

Residents living in that area told Malaysiakini that the dumping has been going on for years where unscrupulous parties will dispose waste every day, hiding in the dark of the night.

Resident and CEO of Jungle School Gombak, Major Kalam Pie said that the Selayang Municipal Council (SMC) appointed a company to take care of this route. Instead of clearing out the rubbish however, the contractor sends a backhoe loader to push all the trash into the ravine.

As it turns out, this cancerous problem has been the bane of Gombak since 2015!

Four years ago, The Star had reported that TEN illegal dumpsites in Gombak were still operational despite the orders of then Menteri Besar Azmin Ali to SMC to shut it all down.

But it seems that little was done to address the issue.

Back in June this year, it was reported that the residents of Jalan Gombak had been complaining of air pollution caused by all the rubbish accumulating at a nearby landfill which was believed to be operating illegally.

Why dump at Gombak?

In the 2015 report, The Star discovered that garbage collectors preferred dumping rubbish at illegal sites in Gombak instead of the legal dumpsite located at Bukit Tagar because it was nearer and cheaper.

They paid RM30 to RM50 to dump rubbish illegally in Gombak while a trip to Bukit Tagar would cost garbage collectors around RM100.

Why is this a problem?

Due to the scale of the issue and the proximity to Sungai Gombak, the river’s water quality has been threatened. This was reported in 2017.

Meanwhile hundreds of dead fish spotted floating in Sungai Gombak in August this year went viral, later confirmed to be caused by lack of oxygen with fishes’ gills filled with sediment.

Sungai Gombak is classified as a “Slightly Polluted River” with water quality is rated at Class 3 (unsuitable for human activities) in the 2015 River Water Quality report by the Environment Department Malaysia.