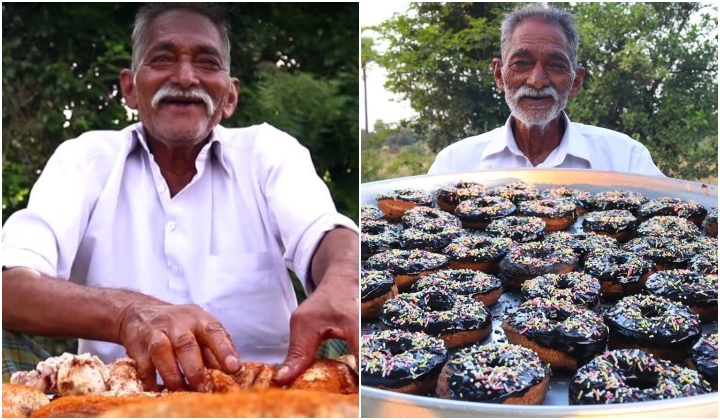 Well-loved YouTube celebrity, Grandpa Kitchen, has reportedly passed away on Sunday, 27 October due to health complications.

The 73-year-old grandpa, Narayana Reddy, from Telangana, India, captured the hearts of many with his videos in which he prepares giant batches of food to feed the less fortunate and orphan children in India.

Grandpa Kitchen is believed to have fed thousands since his YouTube channel was started in 2017.

His cooking tutorials always started with him saying â€œLoving, caring, sharing. This is my familyâ€ and ended with the happy faces of children enjoying what the kind-hearted grandpa prepared for them.

News of his passing was announced through a video of his funeral uploaded to his YouTube channel.

In the video, many people can be seen attending the sombre event, including his family members and close friends.

Besides footage of his funeral procession, the video also featured touching moments from his life, including many of his good deeds.

Prior to this video, the ailing grandpa was last seen in a live video on his YouTube channel to update his subscribers about his health.

Throughout his life, grandpa not only fed hungry children but also used revenue from his Patreon page to provide basic necessities such as food, clothing, school supplies and birthday gifts to orphans.

His Butter Chicken recipe video is among the most-watched videos on his channel, raking in around 5.8 million views. It was uploaded in 2017.

The last video on his channel where he can be seen cooking was â€œCrispy Potato Fingersâ€ which was uploaded on 20 September. After that, he had to take a break due to his deteriorating health.

At the end of his life, Narayana Reddy had over 6 million subscribers to his YouTube channel.

His cooking and kind smile will surely be missed.

United Nations Must Intervene, India Deporting Rohingya Back To Myanmar