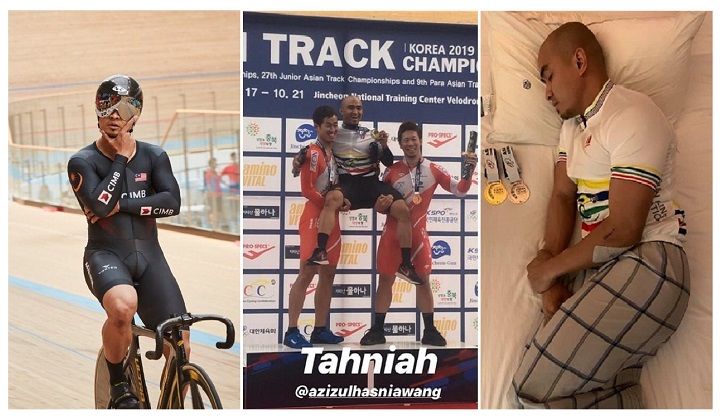 Malaysians have a very good reason to be proud today.

Our very own national track cyclist, Mohd Azizulhasni Awang
has just emerged as the Asian King of Sprint!

While Malaysians rejoice the Terengganu-born sprinterâ€™s incredible
win over Yuta Wakimoto of Japan, few actually know of the struggles to become
the worldâ€™s best.

Which is why Azizulhasni took to Facebook to share his crazy experience to becoming the Asian King of Sprint with his 10th Asian Title.

After losing the first round, Azizulhasni found himself drained and extremely fatigued.

â€œBecause my body was full of lactic acid as a result of full on acceleration, I went straight to the toiled and puked everything out.â€

Thankfully, fellow Malaysian cyclist Shah Firdaus Sahrom who happened to be in the toilet gave the exhausted athlete a helping hand.

â€œI tried to control my breathing and make every effort to recover. Keeping in mind, this time the battle was to take my 10th Asian personal title.

Itâ€™s an achievement that no one else has claimed and most importantly, my personal dream and mission. I told myself, told my brain to not give up and not to let your enemies seize your dream away from you.â€

With renewed determination, The Pocket Rocket Man dove into the second round, calling it â€œreally crazyâ€.

To prevent Azizulhasni from rising to pole position, his Japanese
opponent carried a high pace from the beginning. He knew that the resilient
Malaysian athlete would try his best to overtake him.

But Azizulhasni was doing quick mental calculations on the track, strategising carefully on how to overtake Yuta Wakimoto.

Amongst the factors that he took into account were:

It worked and the national champ WON the second round
with a jaw dropping speed of only 9.824 seconds!

Azizulhasniâ€™s victorious second round led to a third
medal-deciding round where he pedalled with all his might to the top of
the podium and WON THE GOLD MEDAL!

Sprint cycling is no easy sport. As our Asian King of Sprint puts it, the riders go head to head and toe to toe with each other.

â€œI like saying the Sprint event is like Boxing. Because you and your opponent need to wrestle with each other using all their might and skills in their arsenal.â€

â€œIn the world of speed and acceleration, you have to be a little crazy. And errrr, yes, I am crazy. But Iâ€™m only crazy when racing la.â€

We take our hats off to the Malaysian professional track cyclist who did the entire nation proud. His win is proof that hard work and determination pays off!