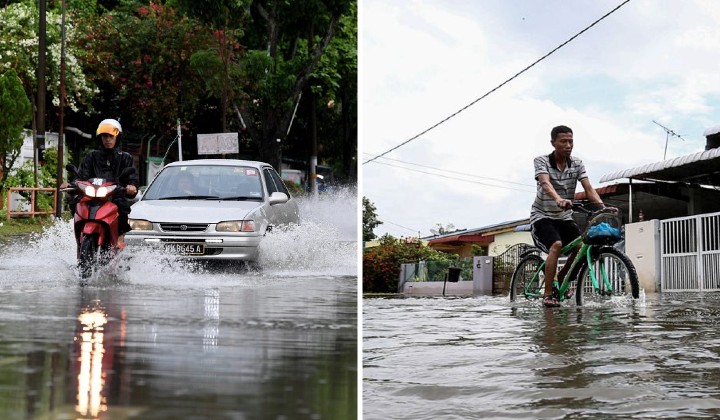 It is clear that we are entering the monsoon season as floods are affecting various states across Malaysia.

Those living in low-lying and flood-prone areas have been warned by authorities to be cautious and anticipate floods.

The heavy rain and floods we’re experiencing are due to the transition phase between southwest and northeast monsoons which is expected to continue until early November.

The authorities have notified that thunderstorms with heavy rainfall and strong winds over short periods of time will occur mainly in the late afternoon on the west coast of Peninsular Malaysia, as well as parts of Sabah and Sarawak.

The risk of flash floods may also increase, especially in the areas near the sea if high tide occurs concurrently with heavy rainfall.

Weâ€™ve rounded up some of the states which have been affected by the flood so far :

195 people including four babies in Seberang Perai Tengah (SPT) were evacuated to four relief centers (PPS) after their houses were affected by the floods.

A total of 46 families were transferred due to the heavy rain which lasted more than 6 hours in the area.

The houses and areas were under 0.3 and 0.75 metre of water while the five roads in the district were closed to all traffic yesterday after being submerged under 0.1 to 0.45 metre of water but have been reopened in stages.

The state has opened three flood relief centers in Perak due to floods.

The overall number of victims in Perak now being housed at three PPS is 270.

As at 12.50 am, 5 people from 4 families were transferred to Parit 13 community hall PPS in Titi Gantong which was opened following heavy rain.

The other 2 relief centres include :

13 people have been transferred to Surau Kampung Kuala Repas flood relief centre after their homes were flooded.

Heavy rains and piles of garbage have blocked the storm drains located in Taman Seri Muda, Shah Alam that caused the flood in the area recently.

Almost all of the houses and commercial areas in Taman Seri Muda were affected including Taman Desa Kemuning.

With the transition phase underway, we would advise Malaysians to be cautious especially if you’re living in a flood-prone area. Also, you can check out the latest info on the floods here.