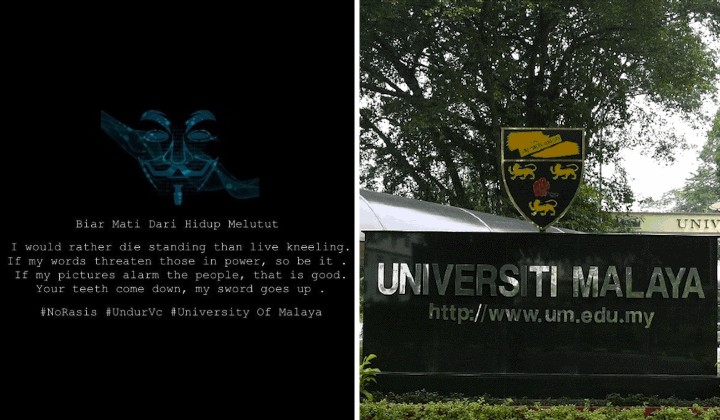 It has been a rough week for Universiti Malaya.

After the convocation protest which caused a stir on social media earlier this week, now it’s their E-Pay Cashless Payment and Records page that is causing headaches as it was attacked very recently.

The portal is used primarily as a financial transaction page for students to pay their fees, fines and other services.

It was replaced with an image of the famous Guy Fawkes mask and a protest message.

The hackers echoed the same sentiments as Wong Yang Ke, who urged the university’s vice-chancellor to step down.

I would rather die standing than live kneeling.

If my words threaten those in power, so be it.

If my pictures alarm the people, that is good.

Your teeth come down, my sword goes up.

This is what it used to be before the page was hacked :

At of the time of writing, here is how the site looks like :

Meanwhile, Wong denied involvement in the attack and he has also given a statement on social media about the issue.

I just received the news and I’m really surprised where UM epay website is hacked since evening, and it was uploaded with a message I shared two days ago.

Well, still have to clarify here before the cyber troopers start accusing me. I know nothing about computer science. And, I didn’t order anyone to do this on behalf of me.

I disagree with this act of hacking.

Right now, we’re not sure who is responsible for the attacks but the attempt made on the page where students make their payments to the university, could jeapordise their personal information and payment data.

This doesn’t really help with the fact that Malaysia is already ranked bottom-fifth for data protection, where the country has suffered several large data breaches involving financial and medical details.