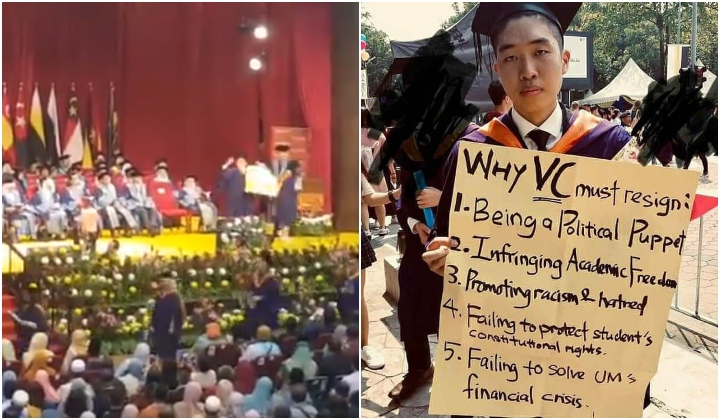 The Malaysian social media sphere is abuzz with videos of a University Malaya (UM) student protesting on stage at his own graduation ceremony.

Wong was protesting to demand the resignation of his universityâ€™s vice-chancellor, Abdul Rahim Hashim, who was seated at the front row of the hall where the convocation ceremonies were held.

Wong explained the protest was against using UMâ€™s name for racial and political reasons.

FYI, UM was one of the four universities listed as organisers of the recent Malay Dignity Congress in Shah Alam. During the congress, Rahim reportedly made a racially-charged speech.

â€œThe message behind this act is that when students or lecturers find a leader to be unqualified, then we have the valid right to criticise. Also, to ask for that individual to carry their responsibility in giving an explanation to us,â€

Social media users feel that Wong had shown disrespect towards the ceremony, the other graduates and the vice-chancellor.

Ruining the event for others just to send a mere propaganda, what rubbish.

Protest is fine. Just weird timing. Could have done it before or after students taking their scroll

Aduh sayangnya. We understand that you wanted to be heard but this is not the way/place. At least if you can actually get a big (and legit) group to solidify the move it could be quite a substantial impact, sadly this just became a mere annoyance instead.https://t.co/Bn61l5q3M9

“Education and manners. I appreciate a well-mannered person more than an educated one.”

Some have even launched a petition calling for the university to revoke Wongâ€™s degree. At the time of writing, the petition had over 43,000 signatures.

“I hope the university revokes his degree”

BTW, Wong is the same UM student who carried a clown-face cutout mocking former premier Najib Razak outside a restaurant in March this year.

In fact, in the early 1930s, teacher trainees from the Sultan Idris Training College opposed British colonialism while students from UM (then located in Singapore) had close relations with the anti-colonial movement.

In the 1970s, university students demonstrated with farmers from Baling, Kedah, to protest against the declining rubber price, the rise in inflation and poverty. It was one of the most iconic street protests in Malaysia which saw almost 25,000 people taking the streets.

The protest was led by none other than Datuk Seri Anwar Ibrahim, who was then a student activist.

Student protests are pivotal in shaping the nation and a sign that the youth are not afraid of voicing out injustices and their dissatisfactions.

In this manner, Malaysian students have always upheld their social responsibility and power to make a change.

What Happened At The #Lawan Protest?