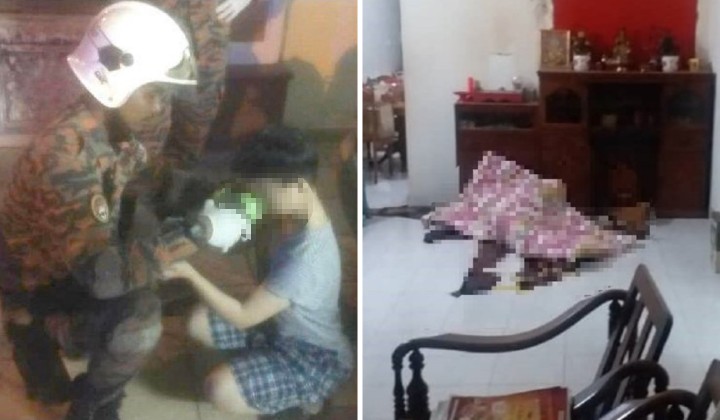 A 22-year-old woman with Down Syndrome was rescued after being trapped with her motherâ€™s corpse at a home in Johor Bahru over the weekend.

The woman endured 4 days of starvation and dehydration before being discovered.

Fire and Rescue Department was notified of the incident by the deceased womanâ€™s son who comes and visits his mother and sibling once a week.

After being unable to enter the house, the man then took a peek inside the home through the front door and saw his mother in the living room, laying on the ground motionless.

Dispatched rescue personnel broke into the home to find the woman lying lifeless.

The special needs woman was later found in one of the bathrooms severely malnourished.

She is now under the care of her brother, while their deceased motherâ€™s body was sent to the hospital for postmortem.

Police said that the incident is being categorised as a case of sudden death.

Malaysians took to social media to share their grief, concerns and condolences.

Many are pointing out the importance of neighbours and the community to be aware and always check up on each other.

This is disheartening. The role of community fails as a medium of taking care of each other…

â€œGod, living in a neighbourhood, one should always greet and check up on each other. But there are neighbours who are very closed-faced when spoken to. Thatâ€™ll be the first and last time youâ€™d greet them. But what happens when something like this occurs? So sad.â€

â€œWhere were the neighbours, neighbourhood head, family members? Poor kid, (mustâ€™ve been) a traumatic experience. The community has failed again.â€

Such tragedies are unfortunate and depressing but not uncommon.

Previously, the skeletal remains of a 78-year-old woman was found in her home in Johor and believed to have been dead some 6 months before being discovered.

So what do you think Malaysia? Is the community at fault for such dreadful incidents? Is our society growing too distant and awfully concerned over personal privacy to our own detriment?