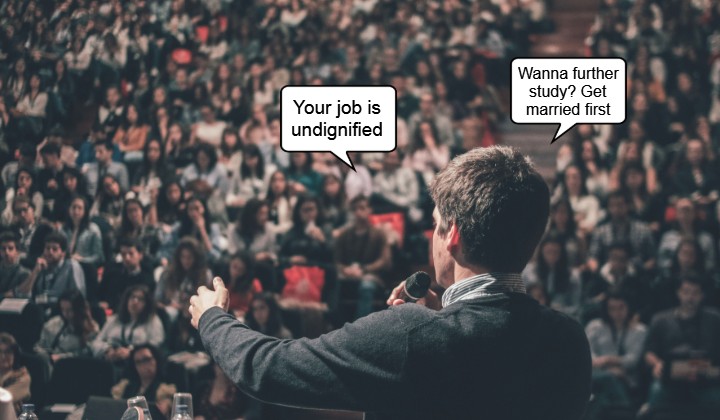 Teachers, lecturers, professors, gurusâ€¦ these people play such an important role in the development of the individual as well as society.

But what happens when these educators say things that, shall we say,
arenâ€™t too educated?

A University Putra Malaysia (UPM) economics expert is being called out for making an apparently unsavory comment towards delivery riders, runners and e-hailing drivers.

During the back and forth, he was asked to comment on the recent rising employment of youth in the gig economy and free-market sector.

Through what appears to be a MAJOR slip of the tongue, the lecturer said that the particular line of work was â€˜undignifiedâ€™ and that educated youths should not be encouraged to partake in such low-level work.

His comment struck a nerve among netizens who took to social media to share their dissatisfaction with the criticism on how some Malaysians made a living.

â€œThis isn’t a problem with dignity but more on survival. Whatâ€™s important is that the work is halal.â€

â€œItâ€™s so unwise for you to mock whatever job they are doing. At least they do halal work to feed their family. In Japan, even janitors are respected by society. Youâ€™re comfortable with your job and title, make you entitled to mock other lines of work.â€

â€œPitty, such high education, yet so blind. Itâ€™s a halal living bro, not panhandling or stealing.â€

â€œWhen the tongue speaks louder than the brain. Itâ€™s true what they say, a word spoken is past recalling.”

The remark was also condemned by the Malaysia E-Hailing Drivers Association (MeHDA) who demanded an apology for the “insensitive” and “hurtful” comment.

Meanwhile, another apparent educator believed to be from the MARA Junior Science College is being confronted for his supposedly misogynistic assertions towards women.

Mr_Traveller took to Twitter offering some advice to his former female students.

Though many seem to agree with the man’s counsel, others find the comment made by the academic to be unprofessional.

You make it sound like its a bad thing

so… he’s in education… and his name is Mr Traveller… and his handle is Stylo…. girl check your eyebrows before telling people what to do, your unprofessionalism jumped out https://t.co/2FmxM2pluk

Many pointed out that in the current day and age, women have the power and potential to not be tied down to male chauvinistic ideals.

Dear so called Mr Traveller,
I believe traveling had broaden your perspective of life.

I hope it does.
If u still caught in ancient stigma, keep traveling. https://t.co/v9pV348NI7

Andartu with a lot of money and can buy whatever I want without have to consult any man. Thatâ€™s a good life right there. Everyone will have their own partner, with or without PhD or master. Stop scaring people about this nonsense shit.

“Education is way more important than finding a mate. (I believe) our soulmates are set, here or thereafter. Even if you educate yourself until you’re old, you have nothing to lose. For me, marriage is a second choice. Why bother…”

We live in a world where our words, actions, and choices determine who we are.

And though others might not share our opinions and ideals, it’s usually best to stay out of people’s noses, especially when what you have to share is hurtful or is truly uncalled for.