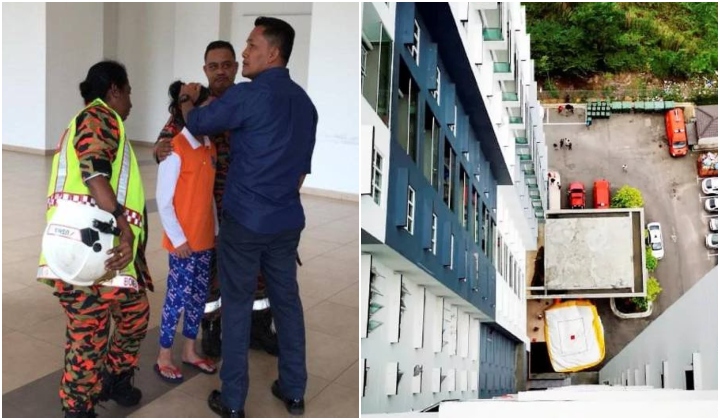 Children usually remind us of our carefree years and are the promise of life. Which is why the thought of a young child contemplating taking their own life is extremely heartbreaking.

A 10-year-old girl in Larkin, Johor Bahru climbed out of the window of her house on the 19th floor of an apartment building on Monday (Oct 7) because she wanted to take her life.

The reasons behind suicide are always complex, but this girl was reportedly triggered to take her life after an argument with her mother over her using her mobile phone

Larkin Bomba was called on scene to manage the situation, and as a part of their rescue operation, they prepared an air cushion on the ground floor and a safety rope from the floor above the girlâ€™s house.

Meanwhile, Larkin Bomba officer, Ismarul Nizam, having had cared for his six nieces and nephews, had a little bit of experience with children and went up to speak to the girl.

When he reached the 19th floor of the flat, Officer Ismarul found two policemen trying to persuade the victim, he offered to try and persuade the girl, using a different approach than the usual one used for adults in the same situation.

After talking to her for approximately 15 minutes, Officer Ismarul managed to talk her off the ledge as she reached her arm out to him to be pulled back inside.

Although this wasnâ€™t Officer Ismarulâ€™s first time handling suicide attempts where victims wanted to jump off a building, he admitted to having panicked when finding out the victim was a 10-year-old girl.

â€œThis is the first case involving a child, there have been two or three cases that involved adults.

â€œWhen we received a distress call at 4.01pm, I wasnâ€™t sure whether it involved a child or an adult. But since the incident happened next to the station, from below, we could already identify the victim, â€

The girl was later taken to meet with the Operation Commander and handed to the police for further action.

In case you werenâ€™t aware, in Malaysia, suicide is considered a punishable crime according to Section 309 of the Penal Code, which states:

â€œWhoever attempts to commit suicide, and does any act towards the commission of such offence, shall be punished with imprisonment for a term which may extend to one year or with fine or with bothâ€

Though, according to this article, victims are rarely prosecuted for this crime. Additionally, in June this year, the Attorney Generalâ€™s Chambers was instructed to study a proposal to decriminalise attempted suicide.

Officer Ismarul has since been named a hero after the video of him talking to the victim went viral online.

Social media users expressed how thankful they were to have Bomba officers like Ismarul serving our people.

“Amazing persuading skills! Support the victim so they feel like safe and slowly they will give in”
“Wow, just watching this makes me feel afraid of heights. So thankful this kid is safe. Congratulations Bomba brother!”
“I feel like crying when listening to him persuading her. Congratulations to the Bomba team who managed to persuade her.”

If you’d like to understand depression in children and what signs to look out for, you can do so here.