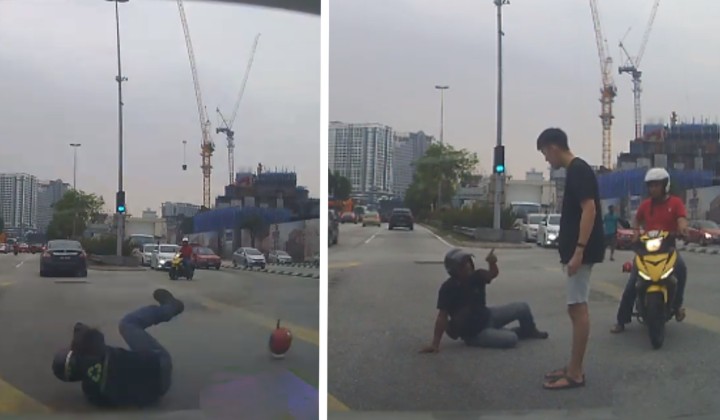 Desperate times call for desperate measures. For some people, that may be as desperate as getting hit on purpose just to demand money for getting hurt.

Facebook user Lum posted a dashcam video of a motorcyclist deliberately driving into the path of his brother’s car so the motorcyclist can be knocked down, complete with dramatic rolling on the ground.

Lum also notes that the dashcam timestamp is incorrect because the internal battery is dead, but assures us that this happened over the weekend.

The motorcyclist then demanded monetary payment from the driver, claiming that he was “hit from the back” and therefore the driver was at fault.

Lum states that his brother tried to exchange contact numbers with the motorcyclist but was refused unless there was compensation.

Unable to reach a compromise, the driver and the motorcyclist then verbally agreed to meet at the police station to lodge police reports.

However, the motorcyclist never showed up.

The sergeant in charge dismissed the case after watching the dashcam recording and concluded that the motorcyclist was at fault. He also revealed that the motorcylist was using a fake license plate belonging to a Myvi!

There’s a common misconception in Malaysia that if there is an accident between a car and a motorcyclist, the car driver is automatically at fault.

That’s not true at all! Like any other dispute, it depends on the case.

There is no rule in Malaysian law that allows motorcyclists to be free of responsibility- all motorists (in a car or on a bike) fall under the same Malaysian Highway Code.

So if you get into an accident, always keep calm and insist on lodging a police report, especially if you suspect that you may not be at fault.

Watch the full video below.