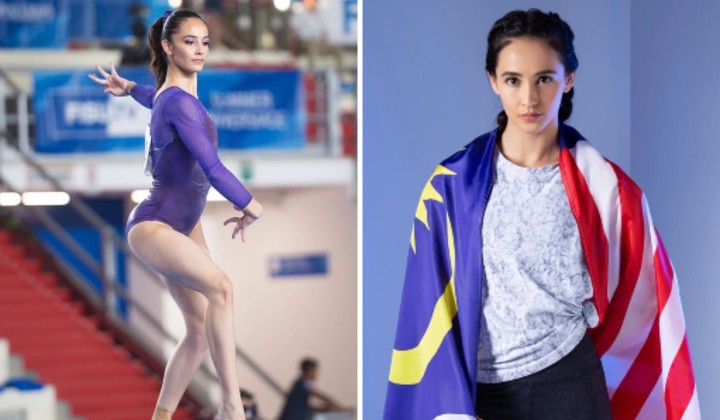 The somersaulting starlet flipped her way to the Olympic stage after finishing 16th out of 20 others in qualifying sessions during the 2019 Gymnastics World Championships in Stuttgart, Germany over the weekend.

Farah Ann now joins the top rank, becoming 1 of 3 national acrobats to have ever made their way into the Olympic arena!

The last time a Malaysian gymnast made their way to the biggest sporting event in the world was 16 years ago when her coach, Ng Shu Wai performed for menâ€™s gymnastics in the 2004 Athens Olympics.

She also became the first female artistic gymnast to qualify for the Olympics after 20 years when her senior, Alexina Au Li Yen participated in the 2000 Sydney games.

Taking to Instagram to share her joy, Farah Ann expressed her lifelong dream of making it to the Olympics.

She said that although her road in the sport has been quite the toss and tumble, she was grateful for the support she has received throughout her career.

As I sit here typing this I still canâ€™t wrap my head around the fact that I qualified for the Olympic Games in Tokyo, 2020. It has been my dream since I was 8 years old and to see it become a reality is an indescribable feeling. After coming so close in Rio and not qualifying, it was devastating. I am incredibly thankful and grateful to soo many people in my journey to get to this moment. To my coaches Ms. Nataliya and Ng Shu wai. You have pushed me, guided me and believed in me and my dreams. There are no words to describe how thankful I am for you. To my amazing teammates, Ing yueh ,Tracie, Ena, Azira, Siti , Rachel, Geanie and Imaan. You are the most amazing friends, teammates, and sisters. Thank you so much for everything youâ€™ve done for me. To my family, my amazing sisters , Tina and Aisyah , my mom and dad. None of this would have been possible without your constant support and love. Thank you to Ms Soo, Ms Sukhdev and Kak Nurul for helping us prepare for this competition, and the support youâ€™ve given us throughout the years. Thank you to KBS, MSN, MGF, ISN especially, Erik, Tomny and Thomas for your continuous support and for allowing us to compete and continue our journey for Malaysia. Thank you to all of you who have supported us , cheered for us and most importantly believed in us. Thank you Malaysia 🇲🇾 Tokyo 2020 here we come 🐯 #farahann #tokyo2020 #malaysiangymnast

The 25-years-old began traversing in acrobatics at the jumpy age of 3 and had repeatedly made a name for herself through her amazing vaults of success, including her first international debut representing Malaysia at the 2010 Commonwealth Games in New Delhi when she was 16!

Since then, the athlete has competed in numerous prestigious events around the world and we thought it would be fun to show you some highlights of her career;

2010 Pacific Rim Championships, Australia – Farah Ann made her senior international debut, taking Malaysia all the way up to 5th place in the team category finals

2019 Stella Zakharova Cup, Ukraine – Finished with 4 medals; gold for the uneven bars category, sliver of the floor exercise category and bronze for the team and all-round category

Despite her spectacular performance in the international arena, after the 2015 SEA Game, Farah Ann caught flack when she was criticised over her apparently â€˜revealingâ€™ and â€˜inappropriateâ€™ attire in her sport of choice.

But the athlete managed to overcome the nit-picking negativity with tremendous support from Malaysians who were proud and overjoyed by her amazing achievements.

We here at TRP and assumingly the rest of Malaysia are definitely looking forward to seeing our gymnastic queen give her all in next yearâ€™s Olympic games!

If you are as excited as we are in seeing Farah Ann’s acrobatic skills, hit us up for a chat on our Facebook, Instagram and Twitter.