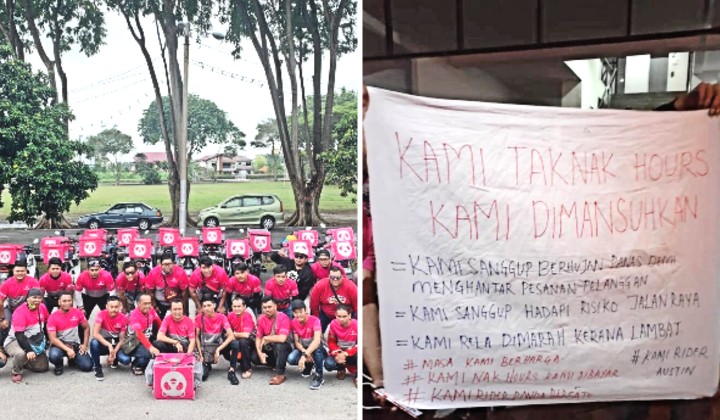 Foodpanda delivery riders are on strike.

“Riders have increased in numbers.”

And hundred or maybe thousand other rider is on their way to the hq!! #foodpanda pic.twitter.com/kL386aoaKs

The protest that’s taking place across the country is due to a new pay scheme which the riders claim will earn them less money.

Previously, riders earned RM4 per hour of work with additional earnings based on every delivery order that they make. This can range from RM3 – RM5 depending on how many deliveries they make in a day.Â

Under the new scheme, riders will no longer be paid by the hour.

Instead, they will be paid based on the number of orders they take, which has been increased between RM4.50 – RM7.

This new pay system apparently would only impact riders outside the Klang Valley.

But riders everywhere participated in the protest in solidarity with their colleagues, refusing to pick up and deliver orders on the mobile app.

Commenting on the issue, Foodpanda managing director Sayantan Das said that the new scheme would benefit riders, claiming that the system would provide more income for riders who show more effort and make more deliveries.

If you do the math, this does make for more money earned if the riders complete more deliveries.

But riders have complained of the lack of orders.

The removal of the hourly pay rate plus fewer deliveries would mean that riders earn less money.

Public opinion on the matter has sided with the plight of Foodpanda riders.

On social media, Malaysian can be seen showing their support for the strike, with some even issuing a boycott and refused to make orders on the app.

gonna stop using @foodpanda_my until they provide a fair practise for their riders https://t.co/48GacZ0BRB

In solidarity with the Foodpanda workers!

I will not be using @foodpanda_my until the workersâ€™ demands are fulfilled. They all need our support. Donâ€™t cross the picket line. https://t.co/LWlSFZkjt8

From the comments: Foodpanda is going to stop paying its riders an hourly rate after Sept 30, or at the most offer them RM3/hour capped at 30 hours/month. These workers deserve better. I won't be using FP until their rights are recognized & fair labor practices are implemented. https://t.co/h8AW5F4tcP

Responding to the issue, Youth and Sports Minister Syed Saddiq said that he sympathizes with the riders who are sticking up for their rights and invites them for an open dialogue.

Pulling a Tony Stark, the minister gave out his home address on social media and invites riders to speak with him personally to discuss the matter.

â€œI sympathize with the plight of Foodpanda employees. I want to hear your voice so we can come up with a check and balance system that protects workers in a Gig Economy system such as Foodpanda. I will raise your concern in the cabinet meeting this Wednesday. An open dialouge (will be held at my home) Tuesday, 9.30pm at No.4 SS1/41, Petaling Jaya.”

Syed Saddiq had also met with Foodpanda’s management to discuss the issue and also invited them to the open dialogue at his home.

“Your voice is heard. This morning, I had the opportunity to meet with FoodPanda’s top management. Some of the issues I’ve raised:
1) Riderâ€™s welfare, especially after the introduction of the recent payment scheme.
2) Why are there different payment schemes for Klang Valley and other areas such as Johor, Penang and other states?
3) The welfare of riders if the new scheme is based on orders and what is the backup plan if weather conditions like heavy rain, haze and so on affect orders.
Foodpandaâ€™s management also pledged that they would re-evaluate if the riders’ welfare were severely affected.
I would also like to invite Foodpanda’s management to join the dialogue session tonight.
For riders and users tonight your voice will be heard.
Don’t forget to attend the dialogue session at 9:30pm tonight at
No. 4 ss1 / 41, Petaling Jaya, Selangor.”

In the age of convenience, we sometimes forget that there are actual human beings exhausting their strength to provide us with this newfound comfort.

Let’s hope that the diligent riders at Foodpanda can resolve this issue soon.