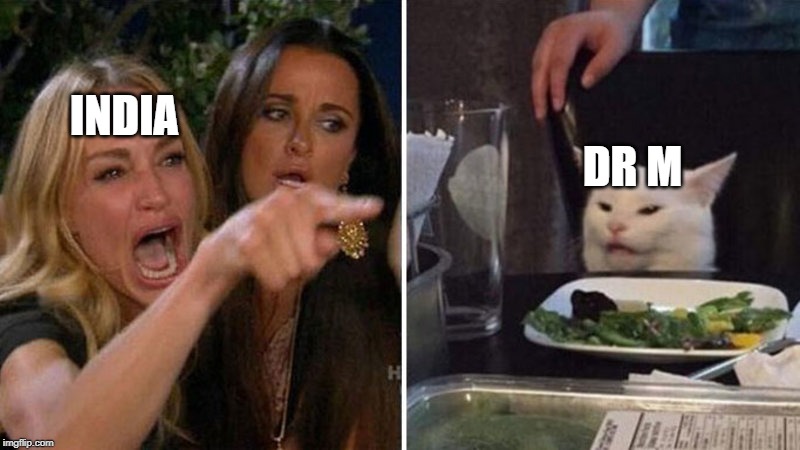 Oh boy, this is a really sticky issue…

The reason? During the assembly, he mentioned about Jammu and Kashmir, a disputed region located in the northern part of the Indian subcontinent.

In the assembly, he mentioned about the invasion and occupation of this particular area which he said:

The helplessness of the world in stopping atrocities inflicted on the Rohingyas in Myanmar had reduced the regard for the resolution of the UN. Now, despite UN resolution on Jammu and Kashmir, the country has been invaded and occupied. There may be reasons for this action but it is still wrong. The problem must be solved by peaceful means. India should work with Pakistan to resolve this problem. Ignoring the UN would lead to other forms of disregard for the UN and the Rule of Law.

Here’s the full video where he mentions Jammu and Kashmir around the 10-minute mark :

For a bit of context, Jammu and Kashmir is classified as a state of India. Located in the vicinity of Karakoram and westernmost Himalayan mountain ranges, they are part of the larger region of Kashmir.

The region has been the subject of dispute between India, Pakistan, and China since the partition of the subcontinent in 1947.

Below illustrates Jammu and Kashmir’s location relative to India

In August, through a presidential decree, India scrapped the special status for India-administered Kashmir (Article 370) which is said as the most far-reaching political move on the disputed region in nearly seven decades.

Article 370 of the Indian Constitution guarantees Jammu and Kashmir as an autonomous region – giving it with the power to have a separate constitution, a state flag and autonomy over the internal administration of the state.

This didn’t sit particularly well with Pakistan, whose prime minister, Imran Khan, said could cause a â€œbloodbathâ€ in the region and provoke a war between the two nuclear-armed countries.

Now with tensions running high in the region, Tun M comes in the picture saying that India has invaded and occupied the region during the 74th United Nations General Assembly and inadvertently gave birth to the hashtag which has been trending for a while now, #BoycottMalaysia

Here are some of the responses of the people of India:

Dear @narendramodi ji, don’t be under pressure by few inconsequential nations. Stick to your decision and we, ALL us patriotic Indians will stand by you and with you. #KashmirHumaaraHai #BoycottMalaysia #BoycottTurkey

Though Malaysia was never on my travel list, Turkey was. Won’t visit both countries ever.#BoycottMalaysia

You don’t have the capacity to confront China on Uighur Muslims, but how willingly and openly you support Pakistan against Indian action on Kashmir!! Bravo !#BoycottMalaysia pic.twitter.com/gUYub7WKzN

Meanwhile, Malaysians are also taking notice of the hashtag and gave responses of their own

Haha itâ€™s trending #BoycottMalaysia 😂😂 India really have to calm down. Why do you feel offended when what Tun said was right? Boycott Malaysia all the way you want but pls tell us abt the fate of thousands of kashmiris in the jails. This is not abt country, itâ€™s abt humanity.

Read all the tweets about how Indian people throws hate on Malaysia just because our PM said the ‘ugly truth’ about their country is really sick. I mean how come they can be so proud with what happened with the people of Kashmir? #BoycottMalaysia

Hey Indians, before you all start with your #BoycottMalaysia bullshit, I am so sorry to burst your bubbles but Mr Modi just screwed up your economy real bad.

It is time to get yourself some reality check. pic.twitter.com/jKi7ofgC8M

This obviously caused quite a stir between both nations but we should focus on resolving the issue rather than spewing hate on to each other, although it is complicated, but, we kinda don’t need that kind of negative vibe.