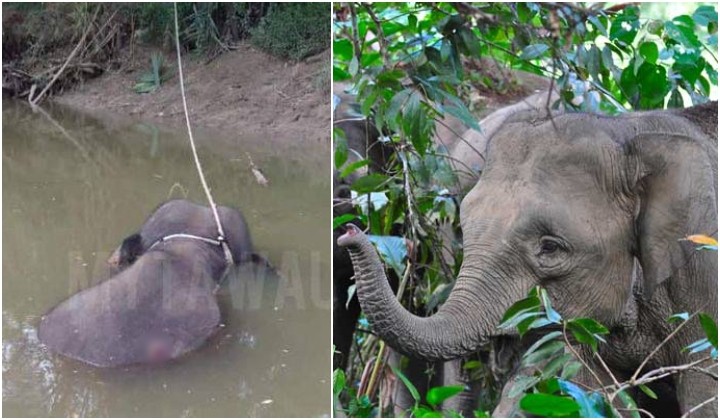 Last week, photos of what was believed to have been a dead elephant calf, went viral on social media.

The photos showed the elephant, tied to a tree by the Sungai Udin riverbank in Dumpas, Tawau.

Many speculated that the elephant had been shot dead due to a large hole in its back.

Alarmed by the photos, Sabah Wildlife Department director Augustine Tuuga instructed for investigations for the elephant’s cause of death to be conducted.

Today, reports confirm that the elephant was actually an adult male pygmy elephant believed to have been shot over 70 times by poachers before they removed its two tusks.

This conclusion was reached by the team of vets and wildlife officials who conducted a post-mortem on the animal after heavy machinery was used to drag the elephantâ€™s carcass out of the river and onto dry land.

According to The Borneo Post, the elephant is believed to have been shot by poachers using semi-automatic guns from a close range.Â

The shots had fractured and penetrated the elephantâ€™s skull and decimated its brain.

Confirming the post-mortem, Augustine Tuuga described the elephantâ€™s circumstances of death as cruel.

No Love GIF from Heartless GIFs

FYI, in Malaysia, pygmy elephants are protected under (Schedule 1) in the Wildlife Conservation Enactment 1997.

The enactments states that anyone found guilty of killing protected animals could be jailed up to five years and slapped with a fine of RM250,000.

Currently, there is an estimate of only 1,500 surviving Borneo pygmy elephants in the wild.

They are regularly found dead, increasing concern about their declining numbers.

According to Tuuga, at least 100 pygmy elephants have died in the last 10 years, some of which were deliberately killed by poisoning or by gun-shots.