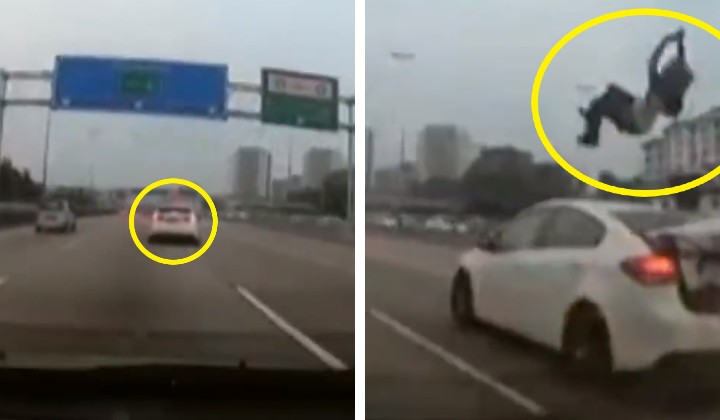 When it comes to driving, even when you’re trying your best to avoid it, sometimes the worst things can happen where you might run into an accident that may lead to injuries or even worse, death.

That is what exactly happened in a recent 23-second video recorded from a dashcam at the Sungai Besi Expressway where an unfortunate motorcyclist was sent flying after colliding into a car.

It shows a white sedan trying to enter the road exit from the middle lane before it was hit by a motorcycle from behind.

According to reports, the motorcyclist flew to the front of the car and suffered a broken hand.

He is now being treated at the Kuala Lumpur hospital.

Some are blaming the car driver for being negligent and making a sudden turn into the exit.

The driver was confused to either go straight or turn into the smart tunnel, then at the very end decided to turn… it is a lesson for all drivers, do not change your mind suddenly to turn into the exit when you are near it

While some are blaming the motorcyclist for not slowing down, thus causing the crash.

Why did the motorcyclist was honking instead of slamming the brakes? From the picture, there is no indication of him slowing down, he only honked and released the throttle.

He should’ve pulled the clutch, used his front and back brakes instead of honking

And the rest were sympathetic towards the motorcyclist due to the nature of the impact.

That was a strong impact. Hope the rider is not harmed.

It is not known the extent of the injuries sustained by the motorcyclist due to the accident, but we hope that he is all right.

Be safe on the roads everybody and drive safe to prevent freak accidents like this from happening.