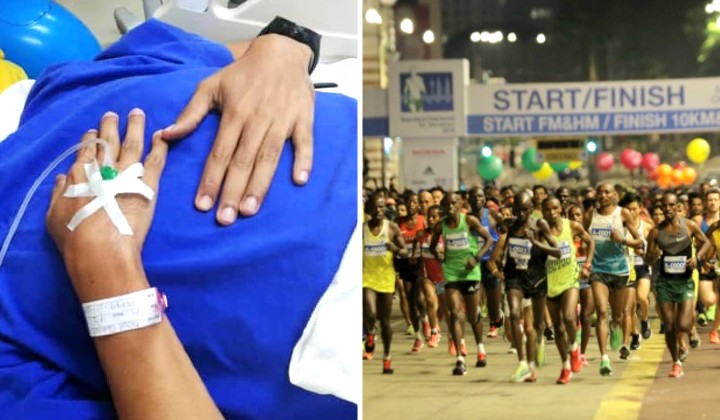 3 runners at the Kuala Lumpur Standard Chartered Marathon 2019 were injured when a car rammed through safety barriers along the MRR2 over the weekend.

1 runner was critically wounded while the other 2 were left with minor injuries.

The driver, however, fled the scene of the incident.

28 roads around Kuala Lumpur had been closed on September 28 and 29 from 2.45am to 11.30am to make way for the annual marathon which saw over 30,000 participants running the courses this year.

Reportedly, the car ploughed through safety barriers set along the MRR2 heading to Gombak before crashing onto the racing route.

Police had identified the driver involved in the hit and run

The woman was said to be driving a rental car at the time of the incident.

On Facebook, a colleague of the seriously injured victim said that the runner fractured his hip and pelvis, and had injured his head and hands.

The victim was apparently an aid to Rembau MP Khairy Jamaluddin and the former minister is seen tending to the victim in one of the images.

The marathon organisers said that they would be offering assistance to runners affected by the incident.

I hope the authorities will take swift action in finding the wrongdoer which broke through the safety barriers, and for the organiser to assist the injured victims in whatever ways possible. We prioritise the safety of the Rakyat foremost. #klscm2019

Those with information on the incident may contact the authorities or the investigating officer, Insp Nur Nadzirah Abdul Rahim at 0124401093.

Who knew that running could be such a dangerous sport…

We wish the victims a smooth recovery ahead.

“Encik Polis, Catch This Car Behind Me” Instant Karma As Ambulance Driver Calls Out Tailgater