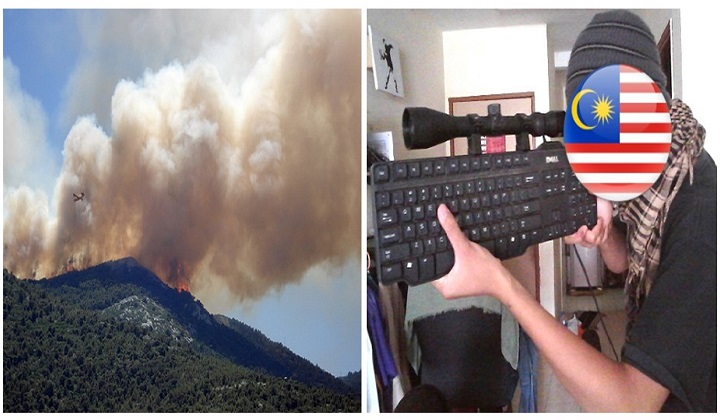 Apparently, one of Malaysiaâ€™s favourite pastimes skyrocketed
to great heights during the haze that choked the several Southeast Asian
nations for most of September.

In fact, a study has found that Malaysians were the BIGGEST
complainers online during the haze.

Typing On My Keyboard After Piano Practice, Feeling Like Bruce. GIF from Piano GIFs

The study conducted among Indonesians, Singaporeans and Malaysians by global market research and consulting firm Ipsos found that 9 out of 10 online conversations on haze were by Malaysians.

They also found that 78% of the Malaysian respondents were most
worried about the air quality in their surroundings.

Appalled by the blanket of toxic smog that descended on their towns, cities and kampungs, scores of Malaysians took to their social media to voice their concerns.

Which resulted in 87% of the haze discussions dominated by Malaysians.

â€œA total of 98,900 haze social media conversations were captured in Malaysia, with netizens creating a huge buzz online on the haze condition in the country.â€

Of these online haze complaints, the discussion was mainly
focused on its impact on health and education.

Meanwhile, our neighbours who were suffering as much as
Malaysians were surprisingly quiet.

7% of haze complaints were by Singaporeans while Indonesians
only contributed 6% to the conversations.

Ipsos also added that the Malaysian respondents also experienced throat irritation, eye infections, coughing and headaches during the haze that choked the nation for almost 3 weeks.

While the haze has largely dissipated from our air due to the changing winds, Indonesian forests continue to burn.

So far, several companies have been blamed for causing the haze and the Indonesian government has vowed to pursue criminal charges.