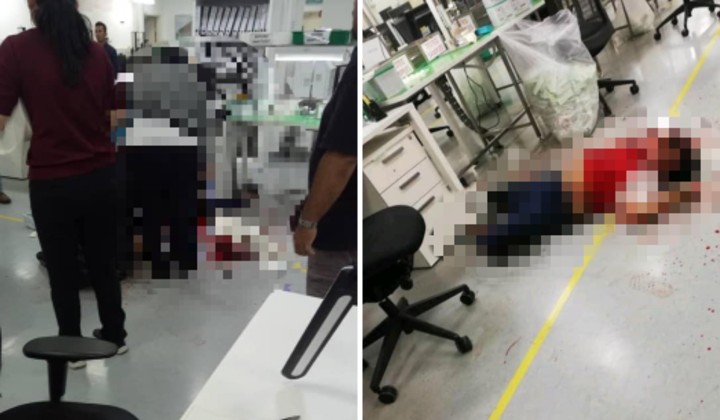 A man allegedly suffering from depression rampaged at work with 2 parangs, killed one woman and injured a man before being shot down by police at a factory in Balik Pulau, Penang.

The deceased victim, a 42-year-old woman was left fatally wounded after being brutally attacked with the machetes, passed away at the hospital.

The second victim, a 53-year-old man was slashed and is currently receiving treatment.

According to reports, the 25-year-old suspect worked as a quality control assistant at the factory for 2 years.

The unmarried man apparently spent his days alone in his room with little interaction with the outside world.

He had been absent from work for a week before showing up to send in a resignation letter on the day of the incident.

The suspect later came at the first victim – a factory supervisor – and hacked her repeatedly on the arm and head.

The second victim, a security manager who was informed of the attack tried to give aid the woman before being slashed in the arm.

Fearing for their lives, other factory employees ran and hid away from the enraged parang-wielder.

Police arrived at the scene shortly after the attack and tried to coax the man to surrender.

Instead, the suspect charged at the responding officers with weapons in hand, forcing them to shoot him down and killing him at the scene.

The dreadful incident is now being investigated under Section 302 and Section 307 of the Penal Code for murder and attempted murder.

Police are urging the public not to speculate and spread misinformation as the incident is still under investigation.

Depression is a serious mental health issue and may lead to dire consequences.

If you or someone you know are showing signs and symptoms of depression, DONT BE AFRAID TO SEEK HELP.

Check out this complete guide to counseling and mental health therapy services in Klang Valley to learn more.