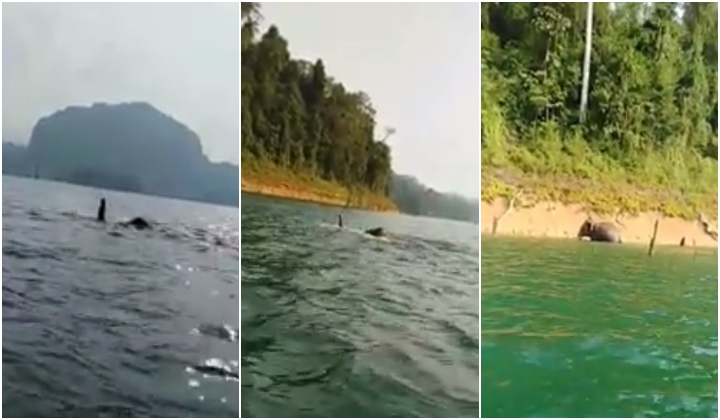 Is someone playing Jumanji in Terengganu?

There seems to be a wild animal popping up almost every other week at the east coast state. Weâ€™ve seen killer whales, pilot whales and tigers spotted in 2019 alone.

This week, another wild animal pops up in Terengganu as an elephant was spotted swimming at Tasik Kenyir!

A nearly 4-minute video showing the mammoth creature swimming about the lakeâ€™s emerald waters has been making rounds on Facebook.

It was no difficult tusk for the mammal that calmly made its way across the lake. At the end, the gentle giant lumbered slowly out of the water and gave a quick pose before disappearing into the surrounding forest.

Shared by Mohd Suwardi Muhamad Azmi, this is actually the fourth time heâ€™s spotted an elephant swimming in the lake.

Mohd Suwardi told Bernama that heâ€™s spotted the wild creatures a couple of times since he started fishing at Tasik Kenyir in 2004.

It is surrounded by the Hulu Telemong Forest Reserve and Hulu Terengganu Forest Reserve which leads to Taman Negara National Park – home to thousands of wildlife, including elephants.

According to the Department of Wildlife & National Parks, Taman Negara National Park is home to the largest population of elephants in Peninsular Malaysia.

This is because it is the largest protected area and also the main release area for translocated elephants since 1983.

An endangered species with rapidly dwindling numbers, elephants are protected under the Protection of Wild Life Act 1972.

Hence, watching the jumbo creature merrily sail across the water with its trunk held high comes as a pleasant surprise!

You can watch the elephantâ€™s aquatics in the video below: