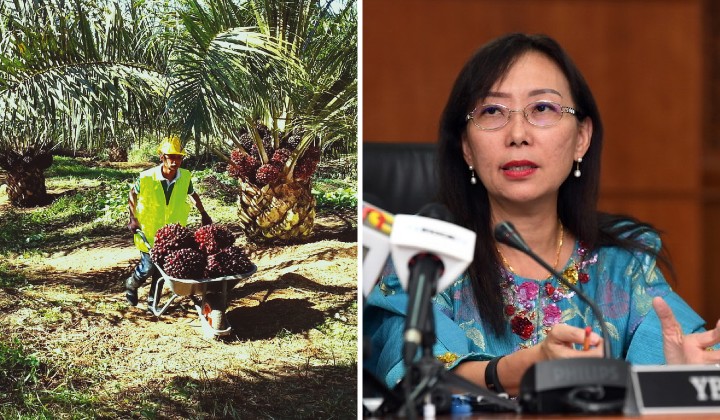 The minister said that public opinion on the matter has been rather biased in criticizing these companies for their alleged open burning and land clearing practices.

Kok explained that other factors also come into play when speaking of the ongoing fires occurring throughout the region.

She also states that companies generally adhere to sustainable agriculture standards and laws.

So whos really to blame for these fires then?

Well, the minister had this to say;

“It is unfair for the public to keep pointing fingers at oil palm planters, alleging they indulge in open burning. That is a forest fire and this is the El Nino season.”

“In many parts of Borneo, Indonesia and peninsular Malaysia, many plants and trees are planted on peat soil, which can catch fire easily during the dry season.”

Peat soil or peatlands are wetland areas that are covered with a thick layer of organic soil made up of dead, decomposing vegetation.

In many parts of the world, peatlands are drained and used for agriculture.

These areas become highly flammable during the dry season and fires happening at these spots can rage on for months as flames continue to smoulder underground.

Kok added that the fires might have also been caused by other parties like, small farmers and villagers that burn away land for crops.

These theories, however, cannot be confirmed until a full report is released by the Indonesian government who are investigating the cause of the international calamity.

Indonesia had recently moved to crack down on Malaysian companies on allegations of their involvement in deliberate open burning practices in the country.

Kok had mentioned that the government would not protect these companies if Indonesiaâ€™s claims are proven to be true.

Indonesian President Joko â€œJokowiâ€ Widodo has also admitted that the fires and hotspots in the republic were due to negligence by his government.