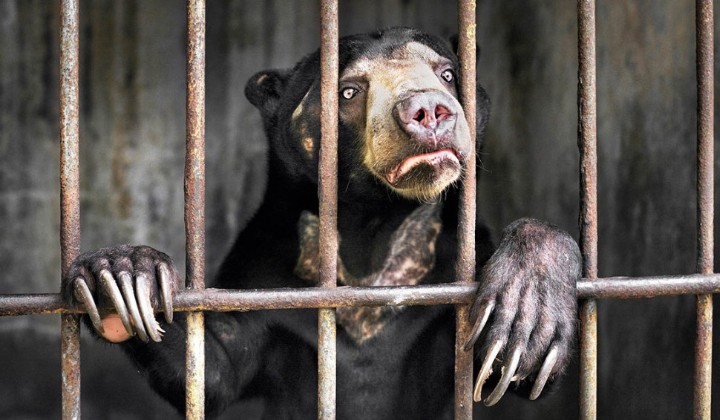 Whats an OK pet to keep?

Yet ANOTHER sun bear is reportedly the victim of human mistreatment.

The Malaysian Nature Society (MNS) was tipped off by concerned citizens of a sun bear being kept under deplorable conditions at a home in Kuching, Sarawak.

Apparently the animal has been locked up in a tiny steel cage for over 7 years!

Even more concerning, it seems that the animal’s captors had a licence to keep the bear issued by the Sarawak Forest Department.

The Star reported that MNSâ€™s protest towards the animalâ€™s imprisonment has been forwarded to the Sarawak Forestry Corporation, an agency tasked with wildlife enforcement.

The sun bear which gets its name the white or golden patch on its chest is an arboreal animal which spends its life foraging the jungle floor and trees for food.

The bear can grow up to 5 feet tall and weigh as much as 70kgs.

(which makes being locked up in a small cage, hellâ€¦)

The mammal is classified as a vulnerable species listed on the International Union for Conservation of Nature (IUCN) Red List.

Sun bears are threatened by habitat loss, poaching and as well as being killed by farmers.

Though the animal is legally PROTECTED by domestic and international laws, according to the Sarawak Forestry Department website, a licence can be obtained to KEEP em as PETS, HUNT, CAPTURE, KILL or to TRADE the animal. (how very ironicâ€¦)

However, the website also states that ‘in general’, licences will not be issued to trade in any of the species listed on the Wildlife Protection Ordinance 1998, which includes the sun bear as a ‘Totally Protected Animal’.

Unfortunately, stories of wild animals being ill-treated by humans are nothing short but common nowadays, and there could be many more cases such as this that need to be brought into light.

You can also report the issue to authorities: