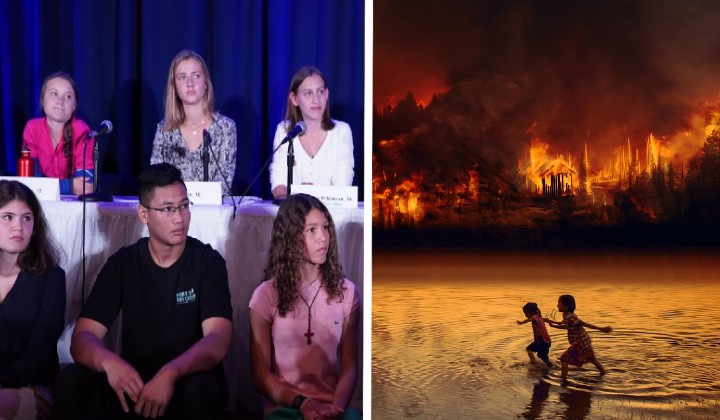 Greta Thunberg, at 16 years old, together with 15 other youth, have put forward a human rights complaint against 5 countries producing the world’s largest amount of greenhouse gas.

Argentina, Brazil, France, Germany, and Turkey are not faced with any form of monetary fine, instead they are demanded to take immediate action to reduce their carbon emissions.

This lawsuit comes hot on the heels of Greta’s impassioned speech at the Climate Action Summit 2019 on the 23rd of September.

This is all wrong. I should be back in school, on the other side of the ocean. Yet you all come to us young people, for hope. How dare you?

She punctuated her sharply-worded speech with emotion and controlled rage, casting the blame squarely on the world leaders who lack the urgency in dealing with the climate crisis.

You have stolen my dreams, my childhood with your empty words. All you can talk about is the money and fairytales of eternal economic growth. We will not let you get away with this. Right here, right now is where we draw the line.

The youths are charging the countries for not having used their resources to prevent the deadly and foreseeable consequences of the current climate crisis, or cooperated effectively with other nations to address the problem.

The complaint addresses these issues as a human rights violation- and if the suit is successful, then the United Nations would classify the climate crisis as a children’s right crisis.

Only those countries were named in the complaint because they are among the 44 that have accepted the convention’s jurisdiction to hear complaints against them.

Of the 44, they are the top 5 leading emitters of greenhouse gases, which is quickly warming up the planet and triggering extreme impacts.

The United States and China, both also top emitters of greenhouse gases, have not signed the part of the treaty that allows children to seek justice for the violation of their rights.

In a 2016 listing of highest emitters of cumulative carbon dioxide, our neighbour Indonesia made the Top 20 at #11.

Learn more of the children’s cause on their official website here.

How Malaysia Emerged As The Unlikely Peacemaker In The World [Opinion]