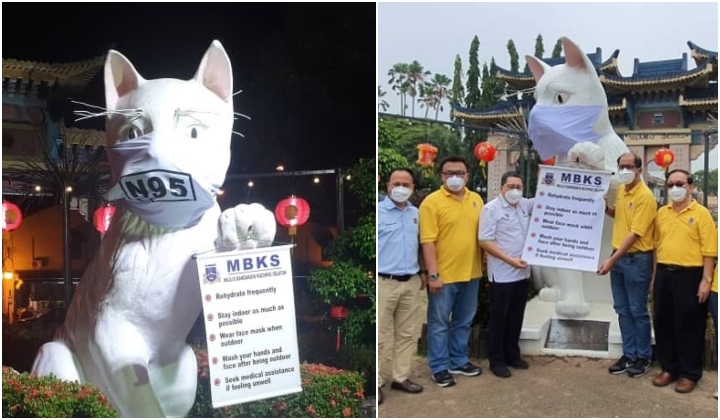 This yearâ€™s haze is probably one of the worst cases of air pollution
in Malaysia as our nation chokes on the toxic smog blanketing the nation.

This yearâ€™s haze is probably one of the worst cases of air pollution in Malaysia as our nation chokes on the toxic smog blanketing the nation.

Well, it looks like the haze has gotten so bad in Sarawakâ€™s
capital that even Kuchingâ€™s iconic statue is wearing an N95 mask!

Borneo Post reports that the Kuching City South Councilâ€™s white kitty statue put on a face mask with â€˜N95â€™ stamped across it to reflect the residentsâ€™ suffering in the haze.

Besides the mask, the iconic feline also carries a banner with haze-protection advice on its left paw that says:

However, the winds of change are blowing, and the end of the
haze is in sight.

The Malaysian Meteorological Department just announced that the monsoon changes are expected to begin on 24th September.

This would bring about strong winds and thunderstorms, which
would greatly ease the haze.

In the meantime, keep yourself protected by reading our article on tips to protect yourself during the haze.