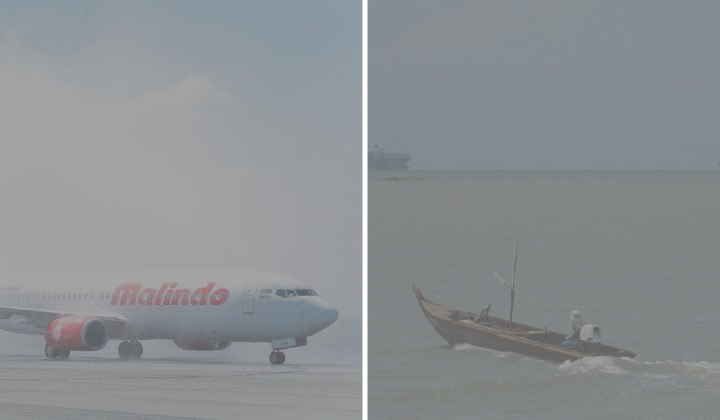 The transboundary haze problem is impacting life on land, air and sea…

Flights between Malaysia and Singapore were cancelled today (September 19) due to haze.

The flights were cancelled due to worsening haze forecasts that are affecting visibility.

Separately, several flights to and from Penang International Airport (LTAPP) yesterday (September 18) were also affected by the troublesome haze.

These flights were either delayed or cancelled altogether.

A number of planes departing from LTAPP were forced to turn around and land, and a few incoming flights were diverted to other airports.

In Perak, some 1,000 passengers were left stranded at Ipohâ€™s Sultan Azlan Shah Airport (LTSAS) as flights were cancelled.

On the high seas, 2 Malaysian fishermen lost their way due to the haze that has blanketed the oceans.

The father and son duo had lost their bearings in the cloud of smog for over an hour before their boat ran out of fuel some 10 nautical miles off the coast of Melaka.

They were later found and rescued by Indonesian fishermen who towed them back to Pulau Rupat, in Riau, Indonesia to refuel their vessel.

Apparently, since the duo had no cash on hand, they had to sell-off around 40kgs of fish that they had caught to the islanders in order to purchase 70 litres of petrol for their trip home to Pantai Puteri, Melaka.

The haze has doomed us all…