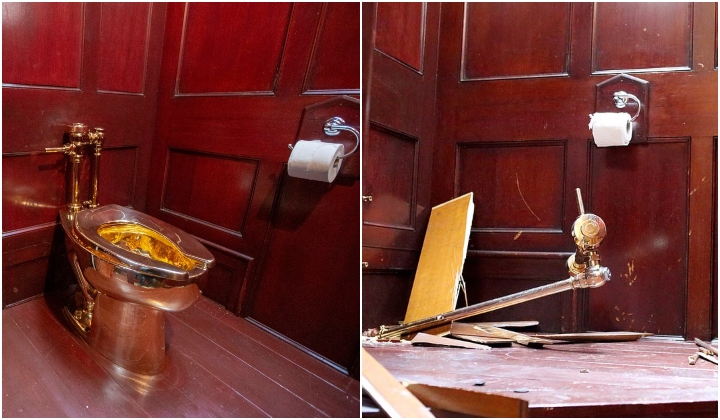 If youâ€™re anything like this writer, then youâ€™ve looked at the things you have in your house and thought: â€œIf a thief enters my home, what things might they steal?â€

Common answers would be phones, laptops, jewellery – anything expensive but also small, light, and easy to carry and conceal.

One would not expect something large and heavy like a TOILET MADE OF GOLD to be the one thing a thief would look at and think: yeah, Imma steal that.

Imma Do My Thing Feeling Myself GIF from Immadomything GIFs

Yet, it appears that has actually happened.

The team at Blenheim Palace, UK, reported on Sunday that an 18 karat gold toilet has somehow been nicked.

In case you didn’t know what Blenheim Palace is, it is a house in Woodstock, Oxfordshire, England which has also been designated a UNESCO World Heritage Site.

Being an iconic part of English history, the occupied residence is also a tourist attraction people pay to visit. Kind of like Tun Dr Mahathirâ€™s house, Seri Perdana in Putrajaya.

The toilet, designed by controversial Italian artist Maurizio Cattelan and titled â€œAmericaâ€, was recently installed there as part of an exhibition by the artist.

BTW, the art piece was a fully operational toilet the palace ALLOWED VISITORS TO USE.

Yes, it wasnâ€™t a showroom toilet like the ones you find in IKEA. Visitors use this toilet…

Thames Valley police inspector Richard Nicholls has reportedly confirmed that the â€œnational treasureâ€ has in fact been stolen and the case is under investigation.

According to reports, police have arrested two men on suspicion of the crappy crime and both have been released on bail.

The toilet has yet to be found, but whoever did it must be flushed with cash by now