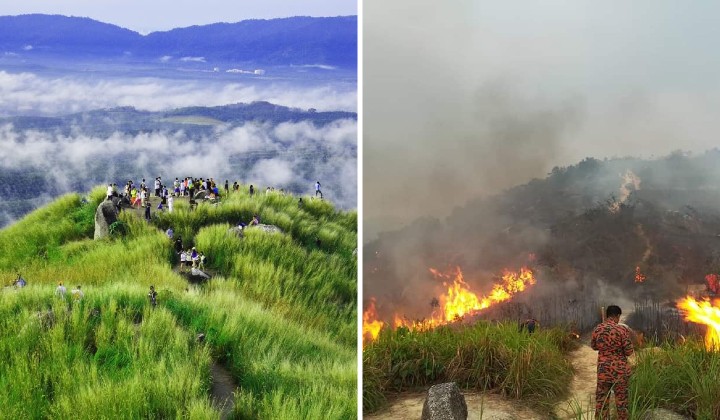 First, it was the Arctic, then came the Amazon, Kalimantan and Sumatra.

Now it seems that our very own Broga Hill went up in flames recently.

Reports say that the popular hiking spot in Semenyih, Selangor was on fire on Monday (September 16).

Nearly three-hectares of the previously lush, green hillside went up in smoke!

25 brave firemen were dispatched to stop the blaze from spreading after reports came in at sometime around 4 pm.

Arriving at the scene, the team was met with 10 other Fire and Rescue personnel who were already at the scene.

Apparently, the first team were there looking for a missing hiker who got lost on the trail (hope they found emâ€¦)

The fire was successfully put out at sometime around 7.30pm.

Though the cause of the fire was still being determined, investigators are not ruling out the possibility of it being started by irresponsible hikers!

Images and footage of the blaze were shared by several social media users online and became quite the hot topic.

Thankfully, there were no reports of injuries occurring from the blaze.