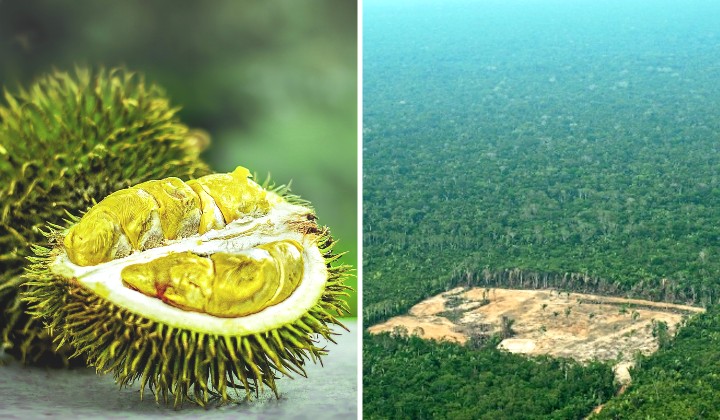 Malaysia has been on a durian crazeâ€¦

The popularity of the fruit skyrocketed with China catching the durian-bug, to a point of even flying tonnes of em over in private jets.

But how are we keeping up with the demand for these thorny treasures?

And how do these plantations pop up?

Whelp, conservationists are worried that the king of fruits fame might come at the expense of Malaysiaâ€™s rainforests.

The fruit which used to be planted in family orchards and small kebuns are now being taken over by big money corporations who are bent on turning a profit, clearing away land in order to do so.

Tree huggers from the Tropical Rainforest Conservation and Research Centre (TRCRC) cautioned that this industrial durian-lution is destroying the countryâ€™s jungles.

According to global nature watchdog Global Forest Watch, 12 million hectares of tropical forests were lost in 2018, with Malaysia high on the charts biggest losers.

And with the government aiming for a 50% jump in durian exports by 2030, the fear of indiscriminate deforestation is rather real.

TRCRC sees durian as the next big threat to the nationâ€™s depleting forests and jungles if there are no checks and balances in place.

Though Malaysia is making efforts to reform its ancient forestry laws, a huge change in attitude is needed if we are to protect our TRUE national treasures.

Let’s hope to be mindful of the planet instead of just our pockets as we move towards the future.