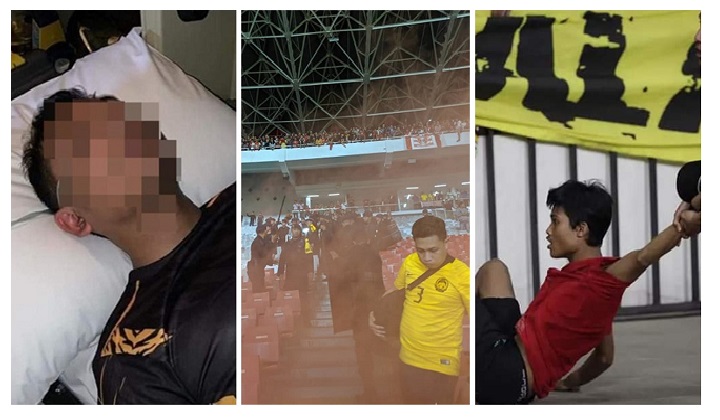 Last night was a particularly exciting moment for Malaysian
football fans as our national team, Harimau Malaya, went head to head with
Indonesia for the World Cup qualifying match in Jakarta.

It was even more thrilling as Harimau Malaya emerged victorious with a 3-2 score against Indonesia after 15 years at the Gelora Bung Karno Stadium aka Gruda squad’s fortress.

Unfortunately, what was supposed to be a euphoriant celebration turned ugly as Malaysian football fans were assaulted during and after the match at Gelora Bung Karno Stadium in Jakarta.

Amongst the legions of psyched Mâ€™sian supporters was Youth and Sports Minister Syed Saddiq Syed Abdul Rahman who took to Twitter to share the ugliness they witnessed at the Malaysia-Indonesia World Cup qualifier.

In the tweet, Syed Saddiq states that metal objects, bottles and flares were hurled at them a couple of times during the match.

We were sitting with the Malaysian fans and there were multiple objects thrown at us including water bottles, metal objects, flares and even a 📱

It got so bad that the match had to be stopped for 10 minutes halfway through as some Indonesian supporters tried to ram into Malaysian supporters in the stadium.

The police had to come in to calm things down.

Worried about the supporter though. This looks bad. They are being quarantine too#HarimauMalaya #Malaysiapic.twitter.com/C3EwhkcxBd

When the match ended with Malaysiaâ€™s win, thatâ€™s when things
turned really UGLY.

Some Indonesian supporters were apparently incensed by the
loss in their own backyard and tried to take their anger out on the Malaysian fans
that were present.

Riots broke out outside the stadium and several fans were injured. Berita Harian confirmed that at least 2 Malaysians were sent to the hospital.

One fan broke his hand when he fell while fleeing the attacks while another sustained head and back injuries from projectiles.

Syed Saddiq and several Malaysian fans had to be quarantined in the stadium for their own safety, waiting for things to calm down outside.

All 24 Malaysian players and squad officials were also
placed into armoured vehicles so they could safely reach their hotel.

â€œGangsterism will not be tolerated at all. The safety of Malaysian players and supporters are my top priority.â€
â€œThis is such a sad moment for the football industry as itâ€™s supposed to be a medium of unity. I promise to demand justice for Malaysians.â€

Despite the acts of violence shown at the match last night. Several Indonesians took to social media to profusely apologise for the shameful behaviour of their countrymen.

Translation: “I’m sorry for the behaviour of the Indonesian supporters.”

Translation: “Congratulations Malaysia. I as an Indonesian apologise for our supporters who came to the stadium without their brains.”

“My presence is to directly convey an apology on behalf of the Indonesian people and government for the unpleasant and ignorant incident triggered by supporters (of Indonesia) as we both witnessed last night.”

We understand that Malaysians are angered by last night’s incident, but do remember that the acts of a few are not a reflection of the entire nation.

Our apologies for the following bad language but we wholeheartedly agree with @hxsm‘s sentiments:

anyways don't spew hate against a whole nation because of the dumbfuck actions of a few. if you do that you're a dumbfuck too.

just look at the countrybol cutiepies and gtfo kids