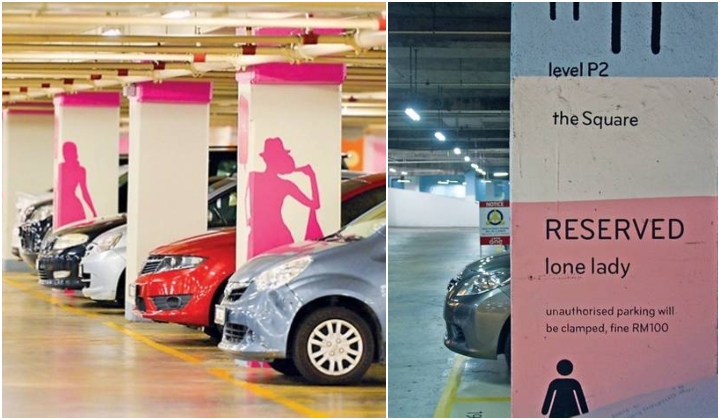 Are you a woman who regularly finds it difficult to get a parking spot at the â€œfemale onlyâ€ parking areas at malls because theyâ€™re somehow ALWAYS full?

â€œOften men would purposely park in the area. When I confront them, some would simply ignore me while others would even yell at me.

â€œOnce, I confronted a man who was with his wife and had parked their car in the (ladiesâ€™) parking lot next to mine. Afterwards, I found my tyres punctured.â€

For Siti Mahziyatul, the female designated parking areas are a much-needed facility as she often goes to the mall alone or with her three-year-old child.

Just like many other women who tend to travel alone or with small children, sheâ€™s scared that if she isnâ€™t in a state of constant vigilance, she would become an easy target for criminals.

The sad and unfortunate truth is that women who are alone or with young children are often more prone to being the victim of crimes.

They are at higher risk of robbery, kidnapping, harassment, or worse, sexual assault, when they are walking alone in quiet carparks.

This factor spurred the introduction of designated parking areas for single female drivers at malls in 2012.

According to the Road Safety Marshal Club president, K. Balasupramaniam, the designated parking areas were to acknowledge how important it was to keep women safe against criminal attacks.

Sad to say, this facility is often abused by men as well as women travelling with adult companions.

â€œMany are still making light of this issue. Some malls simply provide such parking spaces but do not provide safeguards against abuse such as barriers, CCTVs (closed-circuit television cameras) or assigning guards to monitor the area.â€

Or, are you one of those people who donâ€™t fit the criteria but park there and think: Iâ€™m just taking one spot, how many single females could there be, anyway?â€

Do we Malaysians really need to be policed by guards, barriers, or CCTV in order to respect designated parking areas?