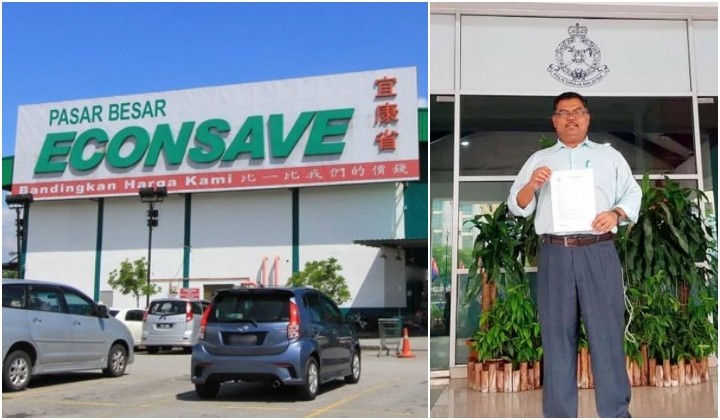 Viral fake news messages are nothing new in this age of digital media.

Without fail, every day youâ€™ll see at least one ridiculously obvious false claim – either on Facebook or in your extended family chat groups (usually sent by your gullible aunties).

Me Texting GIF from Nicolerichie GIFs

Spam messages are so common, Starbucks gets accused of being haram at least once a year because of them.

Most companies simply ignore the messages or post a simple statement on their social media pages, but Econsave Cash & Carry Sdn Bhd, on the other hand, decided to teach irresponsible netizens a lesson.

According to our friends at Econsave, the accounts had spread lies that the supermarket did not sell Muslim and Bumiputera products in its outlets. Whatâ€™s worse, their false statements were widely shared on social media and had gone viral.

â€œEconsave is one of the supermarkets which sell a lot of Bumiputera and Muslim products such as the Tamin, Adabi, Kipas Udang, Faiza, Enaq, Saji and other brands.

â€œEconsave has also participated in programmes organised by the Halal Industry Development Corporation (HDC) to provide a platform for entrepreneurs to meet supermarkets and retail outlets to market their products.â€

Therefore, as soon as he caught wind of the baseless claims, he proceeded to lodge a report at the Johor Bahru Utara District Police Headquarters at 1.15pm on Tuesday (Sept 3).

â€œThere was one report received and it has been referred to the Malaysian Communications and Multimedia Commission.â€

Econsave then gave the admins of the Facebook accounts 48 hours to retract their accusations and apologise for them.

Since the report was made, it seems that one of the Facebook users who made the claim has apologised.

Our friends at Econsave shared the apology on their social media accounts.

“I hereby withdraw all my statements made with regards to Econsave recently.
I admit that I made a mistake and shared false information to the general public, and specifically the residents of Seri Iskandar.
I have deleted the post in question on Facebook and urge that the post needn’t be shared anymore.
I again apologise to Econsave Seri Iskandar Perak and Econsave Malaysia.
I will not repeat my mistake again.
Thanks, Seri Iskandar Archery Club
is only an archery club.
I ask everyone to please share this info to their friends to spread the truth.
If God wills it, thank you.”

Econsave stated that they accept the apology on the condition that the Facebook page takes responsibility for their actions.

Econsave wants the Facebook page to make sure all those who shared their allegations on social media delete those posts to maintain the good name of Econsave and the harmony of all races and religions in Malaysia.

Because weâ€™re huge fans of Econsaveâ€™s social media manager, weâ€™d just like to highlight something:

Even after Econsave alerted their followers and customers that the claims made against them were baseless, there were still some who insisted on believing the allegations.

And in Econsaveâ€™s usual #winning fashion, their social media manager clapped back with clever replies such as the one below:

Moral of the story? Check before you share. And donâ€™t mess with Econsave.

You can view Econsaveâ€™s social media post of the incident below: