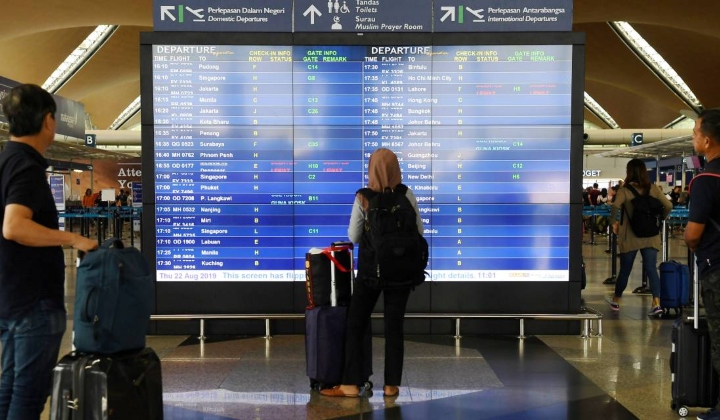 KLIA is currently experiencing intermittent network connection affecting some of our flight information display system. We are working to rectify this as soon as possible.

The fiasco resulted in a reported 68 flight delays during the first 24 hours of the disruption.

It was later found that the systems disruptions were caused by network failure.

Upon identifying network failure as the cause of the disruption, Malaysia Airports Holdings Bhd rectified the situation by replacing the network equipment.

The replaced equipment resulted in positive progress and network stability.

One day after the network equipment was replaced, the situation at the KLIA airports improved.

As most systems were back up and running as normal, the airport was a lot less crowded with manageable queues at the check-in counters.

Malaysia Airports CARE Ambassadors were still visible throughout the airport working hard to ensure the comfort of passengers including distributing coffee and tea to them.

By day four, operations returned to normal at the airports. Even the Flight information display systems (FIDS) had recovered.

Passengers were seen going about their usual business. Check-ins and movement of queues were smooth.

The number of Airport CARE Ambassadors had also been reduced.

We are glad to see smooth passenger flow at the terminal right now. Stay with us for further updates. #MYairportsupdates pic.twitter.com/piSAuEe0N2

Aug 26: Malicious intent not ruled out.

â€œWe will put this in the hands of the authorities to do a full investigation on the matter.â€

Aug 27: A committee is set up to investigate the incident.

The Ministry of Transport (MOT) set up a committee to investigate the actual cause of KLIAâ€™s Total Airport Management System (TAMS) failure and suggest improvement measures to prevent a repeat.

â€˜â€™The committee is given one month to prepare a detailed report to the cabinet.â€™â€™

The six-person team, chaired by the ministryâ€™s secretary-general Mohd Khairul Adib Abdul Rahman is made up of the following:

Meanwhile, the Malaysian Anti-Corruption Commission (MACC) chief commissioner Latheefa Koya said they did not receive any reports linking the network failure to corruption.

KLIA District Police chief ACP Zulkifli Adamshah confirmed receiving a police report by Malaysia Airports over the network failure, though no evidence was submitted with the report.

ACP Zulkifli stated that the investigation will be carried out under Section 427 of the Penal Code for mischief which states:

â€œWhoever commits mischief and thereby causes loss or damage to the amount of twenty-five ringgit or upwards, shall be punished with imprisonment for a term of not less than one year and not more than five years or with fine or with both.â€

Aug 29: Individuals named in police report were questioned by police.

At least four people were reportedly questioned by police after their names were listed in Malaysia Airports’ police report.

The four were said to be â€œfamiliar with the function of network code switchesâ€ and the Total Airport Management System (TAMS) used at both international terminals.

ACP Zulkifli confirmed that a total of twelve Malaysia Airports staff members had their statements recorded and the police intend to summon more people to assist in their investigation.

“The investigation is still underway. We will call a few individuals to assist the probe,

“The process is going to take time in terms of technical and other aspects.”

He also confirmed that the report of the investigations will be forwarded to the Selangor police chief for further action.

Four suspended Malaysia Airports staff lodged police reports to counter the initial report made by the company’s senior IT department manager which implicated them with being involved in the network equipment failure.

Investigations are still ongoing to get to the bottom of the incident. In the meantime, operations are back to normal at KLIA and KLIA2