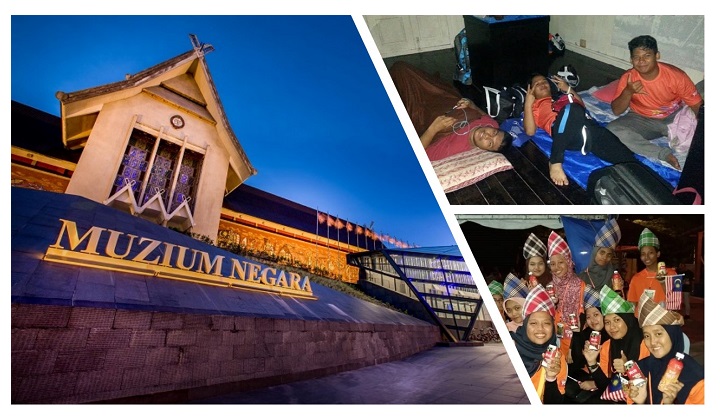 Anyone else here harboured a dream to spend a night at the
museum after watching the 2006 fantasy film starring Ben Stiller, Robin Williams
and Rami Malek?

Well, then youâ€™ll be pleased to know that Malaysian museums actually host Night at the Museum programmes!

An annual event by the Malaysian Department of Museums, it takes place for one night a year, where school students (ages 13-17) curl up into sleeping bags among national treasures in museums across the country.

This year, the movie-fantasy-turned-reality took place on the eve of Merdeka in 36 museums, from Muzium Negara to Muzium Negeri Sarawak.

While itâ€™s plenty cool to be spending the night next to important artefacts, the programme was a triple threat with a pre-Merdeka celebratory party AND a record-making event.

As a result, their efforts earned them a spot in the Malaysia Book of Records for â€œMost Number of Participants Wearing Tengkolok For An Educational Programme Night At The Museum.â€

FYI: This record-making event was done in collaboration with Yeo’s Malaysia.

With 3,209 participants delving into the nationâ€™s history and culture on 30th and 31st August, itâ€™s certainly one of the most exciting (and appropriate) way to celebrate our Independence Day.

Besides obviously sowing seeds of pride amongst the nationâ€™s
young, the Department of Museums hope that this midnight extravaganza would strengthen
the role of museums as an informal educational institution.

We also have to say again how incredibly cool it is to spend a night at the museum. Youâ€™re literally sleeping with treasures!

If any of the kids here want to join in the fun (sorry adults), just keep an eye out for announcements of the Museum Departmentâ€™s website, Facebook or Instagram.