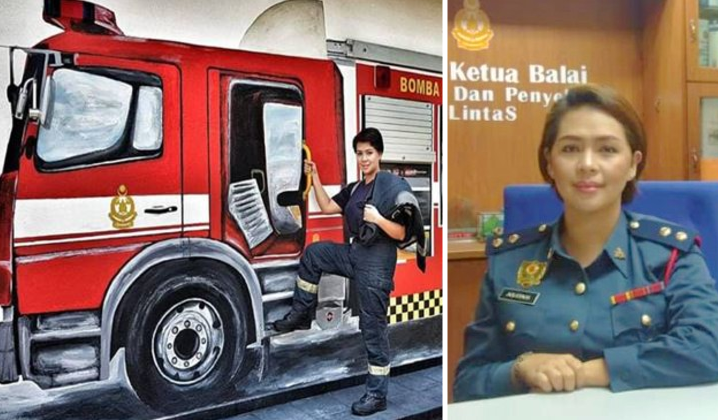 Malaysian women are famously known to break the barriers and spearhead change, like our first woman Deputy Prime Minister to the first female Chief Justice.

Now we have Agustavia Joe Guasi, a 37-year-old mother of four, who was just promoted to Sabahâ€™s FIRST Female Fire Station Chief.

Agustavia â€˜stumbledâ€™ upon the call to be a firefighter 18 years ago when she just wanted to be a woman of career.

According to her, it was through sheer luck that she got promoted to head her own fire station.

â€œAs a senior officer, I am now responsible for ensuring that those under me execute their duties according to procedure,â€

Initially, she joined the force simply because there was an opening.

â€œ(I) Didnâ€™t know the task of a firefighter, (I) only knew that firemen put out fires and rescue people from road traffic accidents.”

Agustavia was first recruited back in 2001 when she underwent training with the Fire & Rescue Services.

She was then absorbed into various departments of the Fire & Rescue Services, and over the years, grew to love the job.

â€œIt feels right with my soul.â€

She has even joined multiple rescue missions.

Agustavia has helped in earthquakes and droughts of Gunung Kinabalu and Papar respectively.

This strong woman who came from a remote village in the foothills of the Crocker Range hopes to inspire others, especially women to become firefighters too.

Being a mother of 4, she realises her role as a mother is very important too. However, some sacrifices need to be made to make way for her duties.

Agustavia strongly feels that she can do it with help from many parties.

â€œI will have encouragement and support from my state director, deputy director and other station chiefs who will motivate me to do my best.â€

Agustavia is currently gearing herself to accomplish this mission by pursuing a Bachelors degree in Public Administration through a long-distance programme by University Utara Malaysia.

We at TRP wish her all the best for her future endeavours!