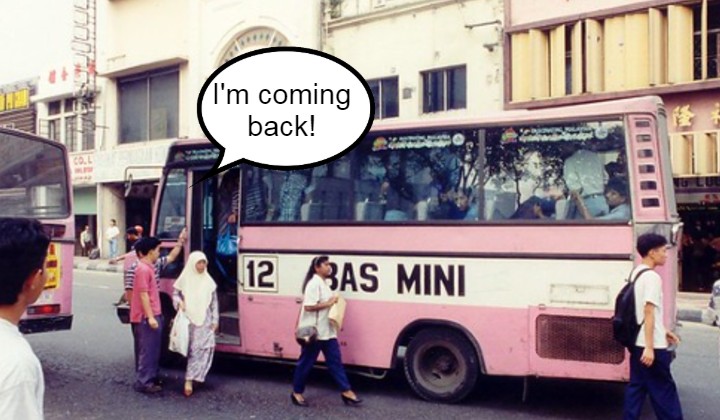 They didn’t specifically say it was going to be the old PINK minibus, but we just can’t help reminisce the good ‘ol days on the bus anyway!

According to Rapid Bus Chief Executive Officer Muhammad Yazurin Sallij, the new mini busses will only be able to carry 31 passengers at a time, unlike their normal busses which can shuttle 64 people at one time.

Currently, the re-introduction of the minibuses are at a trial stage.

The trial is planned to run for three months from September 1 to November 29 on route T300.

During this time, only 3 buses will be used to shuttle passengers between Ampang Point and Bukit Indah hub via Jalan Rasmi.

Yazurin reports that the minibus will run at a frequency of every 15 minutes during peak hours and every 25 minutes at other times.

If the service receives good feedback from the public, the minibuses might be coming back for good! And on more routes too!

Did you know it has been over 20 years since the minibus cruised the roads of Kuala Lumpur?

Once popular between the 1970s and 1990s, it ceased to exist to make way for bigger buses to accommodate the ever-increasing number of city people.

However, the relaunch of the minibus is expected to help access neighbourhoods with narrow roads.

Help give feedback to the Rapid KL team by calling their helpline at 03 7885 2585 or by emailing your suggestions to suggest@rapidkl.com.my.

So are you guys excited with this piece of news?