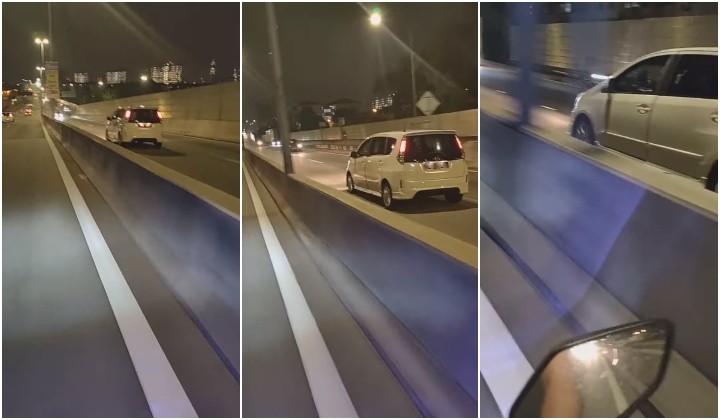 A 45-second video of a Proton Alza driving at high speeds against traffic flow on the MRR2 near Pandan Indah was recently shared on social media and has since gone viral.

In the video, the white Perodua Alza can be clearly seen driving at about 80km/h in the right lane of the opposing way on the highway.

Selangor Traffic Investigations and Enforcement Department chief Supt Azman Shariâ€™at said that police are currently investigating the matter, and are working towards locating and arresting the driver.

Police have also reportedly taken statements from drivers involved in an accident with the vehicle.

Although rare, this isn’t the first case of someone driving against the flow of traffic.

Earlier this year in Perak, a 27-year-old man drove his Honda against the flow of traffic and ended up crashing into several vehicles while being pursued by police along Jalan Raja Idris.

Aside from finding a fake pistol, cannabis, methamphetamines and a police vest in his car, the police also found that the man had an extensive criminal record of 15 cases of robbery, car theft and house break-ins.

Police investigated the case under the Penal Code and Firearms Act 1960.

2. Man drives the wrong way on North-South Expressway, collides with another lorry.

In October 2018, a 37-year-old lorry driver drove against traffic for 3km on the North-South Expressway after exiting the Sungai Buaya toll plaza and collided with another lorry. Fortunately, no one was injured in the incident.

The driver was found to possess no driving licence, had 64 unpaid summonses, 36 arrest warrants and had once been charged under Section 379 of the Penal Code for theft.

Police investigated the case under Section 42 (1) of the Road Transport Act for reckless driving.

In July, 2018 a Mazda 3, driving against traffic on the right lane of the MEX highway crashed into a Proton Preve, causing a chain-reaction collision involving three other cars on the MEX highway.

A 36-year-old passenger of the Preve died while the other people involved in the accident were hurt.

The case was investigated under Section 41 (1) of the Road Transport Act 1987 for reckless driving.

In November 2017,  an 81-year-old man, accidentally drove his Proton Savvy against the flow of traffic along the East Coast Expressway near the Kuantan Toll Plaza.

The elderly driver had made the mistake due to his poor memory. He ended up being stopped by police who informed him of his mistake. Thankfully, nobody was harmed during the incident.

5. Intoxicated part-time model drives against flow of traffic, kills one.

In March 2017, a 19-year-old part-time model drove against traffic on the North-South Expressway causing a five-car crash which killed one person.

The young woman drove her Proton Gen 2 in the fast lane against the flow of traffic for five kilometers before colliding head on with a Perodua Kelisa, killing the driver.

The model was detained and later tested positive for methamphetamines.

She was charged under Section 44 (1) of the Road Transport Act 1987 for driving while under the influence of intoxicating liquor or drugs.

We urge all Malaysians to drive safely and according to the law. The safety of yourself and other road users lie in your hands.