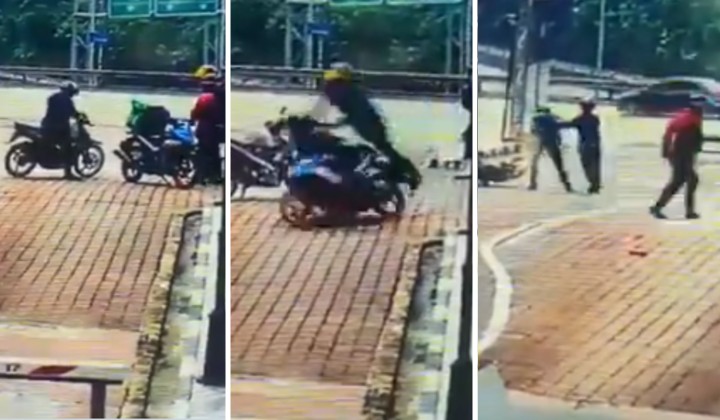 The footage showed the victim being stopped and attacked by one of the suspects while trying to make away with the victimâ€™s motorcycle as his partner remained on the ready to make their getaway.

Refusing to back down from his attackers, the victim stood his ground and fought back the armed men putting a stop to their robbery attempt.

The victim who suffered injuries to his head and body was then aided by members of the public.

Apparently, a mobile phone belonging to one of the two suspects was recovered at the scene believed to have been dropped by one of the attackers during their escape.

Fortunately, due to the fast actions of the authorities, one of the two suspects is now in custody and is awaiting to face charges in court.

The 33-year-old suspect was arrested by the police at Taman Kepong, Kuala Lumpur over the weekend, while his accomplice still remains at large.

The assailant will be charged under Section 393 and Section 324 of the Penal Code for attempted robbery and for voluntarily causing harm to another person.

Police are currently still on the hunt for the other suspects with the information provided by his caught partner.

Commenting on his recent dance with the devil, the 22-year-old victim, identified by the name Amirul was rather traumatised by the ordeal.

The brave victim said that he was willing to put himself in harms way to protect his beloved Yamaha Y12zr motorcycle which he affectionately named, â€œYuskuâ€, from being taken from him.

Amirul mentioned that heâ€™ll be taking an extended break from his job to recover.