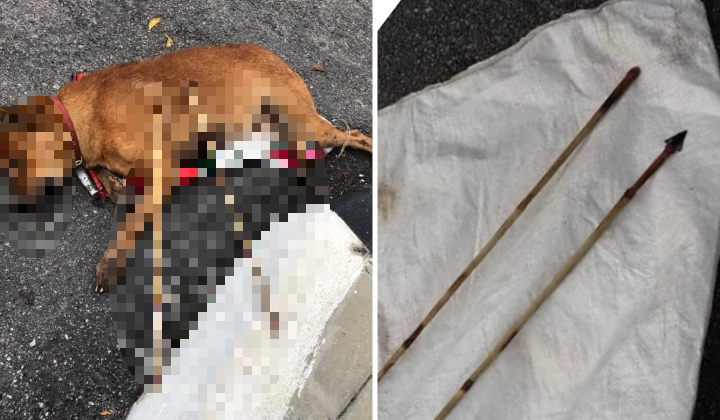 A RM3,000 reward is being offered to whomever that can provide information on a dog that was horrendously killed with arrows in Langkawi over the long Hari Raya weekend.

Word of the tragic incident had apparently been brought to light by Facebook user Chen Liau Weng who posted several images of the unsightly scene which quickly became viral on social media.

Images showed the poor pupper laying dead on the side of a road near a 24-hour convenience store in Dayang Bay.

The canine is shown to be covered in blood with two arrows lodged in its torso.

The viral posting prompted a police report shortly after.

It was reported that when police got to the scene, members of the public were in the process of disposing the animalâ€™s carcass into the ocean. (which in itself is a little bit disheartening…)

The animal’s body was later retrieved and sent to a private veterinary clinic for a post-mortem.

It was still undetermined if the animal had been a stray island dog or whether it had belonged to someone as no reports of a missing pet have been made.

However, the dog can be seen wearing a red collar around its neck in several of the images which were posted.

The case is currently being investigated under section 44 of the Animals Act 1953 for animal cruelty and police are asking anyone with information on the cruel killing to contact the authorities.

Malaysian Animal Association president Arie Dwi Andika said that the barbaric act should not be condoned and offered an RM1,000 reward to those who come forward with info on the killing.

News of the tragedy also spurred two other individuals to come forward offering rewards for information on the case.

I am offering additional RM1,000 to anyone with information about the mentally sick fellow who did this.

This offer was later echoed by another Twitter user, S.Shiyamala who also offered RM1,000 to anyone with intel on the case.

Regardless of the reward, those with information on the gruesome murder, please come forward to the authorities immediately.

You can also contact the Malaysian Animal Association via WhatsApp at 011-20901097.