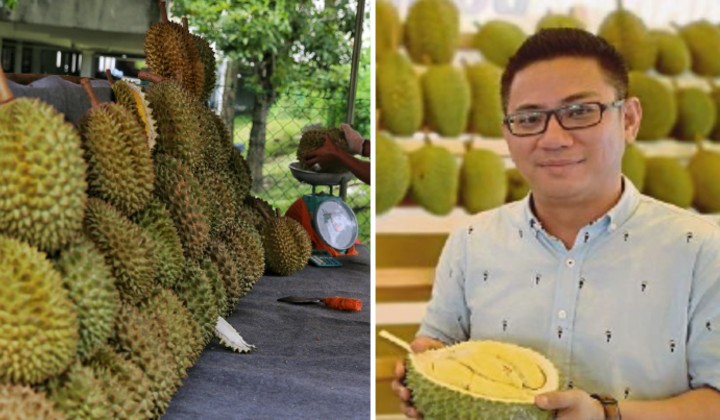 You know how they say the durian is the King of Fruits?

Well, this Negeri Sembilan man is the King of Durians!

Chin Ken Soon is a 38-year-old who owns more than 80 hectares of fruit plantation in Pahang, growing an assortment of durians!

From the famous Musang King to the sweet Kampung durians to the D24 durians, he has them all.

He describes that sales from his durians ALONE can reach up to RM4 million a month.

The rest of his sales come from the export of other kinds of fruits grown in his orchards.

Imagine RM4 million from just selling durians! And then making that same amount from selling other fruits from his orchard.

Chin explains that he also exports about 100 tonnes of other kinds of fruits to countries like China, Saudi Arabia, and Europe.

That is about 8 containers shipped overseas monthly!

The other types of fruits in his orchard, include papaya, starfruit, watermelon, and mangosteen.

On another more entrepreneurial note, Chin has now begun opening malls all over Negeri Sembilan dedicated to selling just fruits!

His first fruit mall was opened in Temiang last month!

We wish this King of fruits a fruitful life filled with more fruit sales!

[CORRECTION: In the previous article, it was stated that he made RM4 million in profits, instead, that is actually the amount he made in sales.]

Love Durian So Much You Want To Eat And Invest In It? Now You Can!